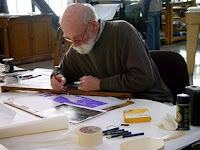 A painting by Robert Bechtle. A tutorial on seeing. A trip nostalgic.

I grew up on this street in the Parkside or Outer Sunset district, also called the Neighborhoods or the Avenues, formerly the Dunes, in western San Francisco out by Ocean Beach, out by the Zoo, out by Stern Grove. I didn’t live here for all of my childhood, but this is what I think of as home. This painting, by my favorite painter, is what I think of as home. Because home is an idea or, at best, an image. Not a place, real or otherwise, a google and oogle map mirage. If a home falls in the forest with no former inhabitant to hear it, it really does NOT make a sound, but wherever the former inhabitant is home is screaming all the time: "Come back, Shane, come back," in a crazed, ghostly voice inside the head. A siren call or the echo in a shell, it’s something you had once or think you did, maybe deja vu, maybe ocean view. Maybe home/heart is where you left it, where you lost it, where you broke it. Your time machine’s broke, though; you’re stranded in the now of the canvas.

Walking by these houses, after a hard day at Parkside Elementary, I told my friends lies about the Pacific trips and escapades that I’d had during the night in the belly of a friendly whale I met down the street at the beach (thanks to Disney’s Pinocchio). Mostly I described China to the Chinese girls I walked home with; mostly they giggled. My storytelling career begins on this very spot.

Every blink of an eye is a still photograph printed on the virgin cells of the brain, one added to all the rest, piling up like flapjacks, like the dead photo bin at the junk shop. Flipped through quickly they seem to be moving, huh? But what is beautiful, what is art? Pull one photo-card out of the deck. Magic trick time. Is one as good as the other? Certainly the one above is the best for me; coulda been the other side of the street, I guess. Who cares? Weird that it’s so quiet. Is it as peaceful as it seems? Actually—looky—it’s three paintings: can I switch ‘em around? Hang ‘em in separate rooms? By the way, what are you looking at right now at this instant? It could be your last, you know? How important is this experiential moment compared to all the rest? Keep flipping. Keep moving. Cut the cards and deal. Nothing up my sleeve.

Someone described this style of painting as a form of abstractism, at least from the painter’s point of view. That those are not houses necessarily, that’s not a street, cars; those are shapes, colors, lines. Stand on your head. Can you look at it like an optical illusion? A woman’s face or a vase? Can it not be the street of my youth 10,000 miles away? For you it’s easy. It’s another painting. Optical delusion.

I, painting, Sunset Intersection in this case, I challenge you; I defy you to make of me something for yourself. You can give me symbolic significance if you want, but it’s your contribution, not in my lines or intention. Yet, I’m not an empty container or a provocation either. I’m one card as good as any other, and I need you to make me. That’s your freedom. Go ahead, make me.

I ran into Robert Bechtle once at the San Francisco airport. I had time to kill before my flight and, wandering, I found a painting hidden in a corner (SFO has a great art collection) called Frisco Nova of a man watering his lawn in a middle-class neighborhood of white stucco houses. That painting shocked me. Shook me up. Never the same again. I know that man; I know that street; I am part of that picture! So that’s how I met Robert Bechtle, a San Franciscan. That’s how I met Hyper-Realism or Photo-Realism or Realism, which is NOT copying a painting from a photograph. I’ve seen sidewalk painters do that for tourists in a matter of minutes. This is painting as an exquisite philosophy. The painting asks, “Who are you?” It says, “I’m not an exhibitionist (like most of my colleagues), so why are you staring at me? Did you resist hypnosis or let yourself go under?”

A new way of seeing, intensity of intent, in that split second, right here right now: LOOK AT THIS! Look what I found; this is reality; this is the world you live in; this is outside your mind not on drugs. This is the other, but still your life, your still life. No judgment now, just live. Be. Like the eyes that saw this and froze it, the hands that took weeks to reproduce it, the eyes that saw it again. The farthest thing from the painting, Sunset Intersection, is the photo it was based on. Hey, what does that mean? Aren’t they the same? Bechtle in his workshop day after day bent over his table until he’s an old man won’t even answer that stupid question.

If it reminds you of something, even a false memory, you’re either in the painting or you’re outside looking in the painting. Enter at will. Get sucked in and spit out, back and forth. Or the painting will exit its frame for you and invade your space. Look around the airport, everything’s a painting! Go outdoors. Everywhere is important! And you’re not waking up from this dream. I dare you to walk down that street again.

I have been in the witness protection program here in Sicily for the last thirty years. Must have been something I saw. Chosen exile, self-inflicted house arrest, called ex-patriatism (not ex-patriotism, but a bit of that too). When you change your name and leave your family (who are always your family but feel betrayed or, at least, abandoned) and your friends (who find other friends fast), take all your belongings in a couple suitcases and tell them to give the rest away, it means you ain’t comin’ back. You, as you leave, ain’t never comin’ back.

And you don’t and can’t because what you would come back to doesn’t exist any more. Not the houses and trees, but you who were there are not you who are here. The you you left is gone. The photo card flipped by like those minute-flipping clocks. Ask the Chinese girls; you in the myth of the you of days past is bigger an’ better an’ braver than the you as you were. As you were. Attention! As you were. At ease.

Okay, you change, but Sunset Intersection stays the same, doesn’t it? Isn’t that the point, cryonics? Or do you look at it each time with different, older eyes? Wow, fixed as it seems, it’s never the same either. Anyway, you can’t choose, you can’t stop that flipping.

So you stood at the intersection, chose a direction, and cleared out towards a sunset. Don’t we all do that? Isn’t it called growing up? Leaving the nest? Heading off into the wilderness to seek your fortune. Into the wild. Being your own family of one, house of one, sack of bones you carry with you always. Embracing danger, courting adventure. Or do we all do that? Sometimes I feel like over here in the Land of Eternal Children, a.k.a., the Land of Spoiled Brats (Mommy do my laundry; Daddy get me a job), I’m a cowboy stuck in a briar patch of giant interconnected nests made of twigs and string, where there’s only one way out. Horizontal. Not today. I’m enjoying this painting. Wish I were there.


Mutt: So he found his title. ‘Bout time.
Jeff: I liked it better before. Now we’re stuck looking at the same picture every day.
Mutt: And what crap too. I may toss my cookies.
Jeff: Yeah. Nothing to get all choked up about. Sometimes he acts like such a baby!
Mutt: It’s no act. So I’ve got a question for you.
Jeff: Shoot.
Mutt: Bang.
Jeff: Well, here’s one for you: Why do psychics have to ask you for your name?
Mutt: And what happens if you get scared half to death twice?
Jeff: And if Barbie is so popular, why do you have to buy her friends?
Mutt: And how do you tell when you're out of invisible ink?
Jeff: And, okay, so what's the speed of dark?
Mutt: Had enough?
Jeff: Damn Wright!
Posted by E. Martin Pedersen at 9:48 AM 6 comments: