An Oregon Message by William Stafford 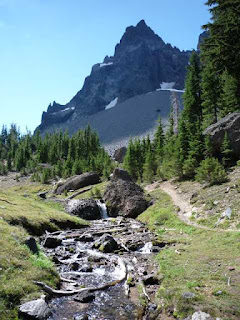 When we first moved here, pulled
the trees in around us, curled
our backs to the wind, no one
had ever hit the moon—no one.
Now our trees are safer than the stars,
and only other people's neglect
is our precious and abiding shell,
pierced by meteors, radar, and the telephone.

From our snug place we shout
religiously for attention, in order to hide:
only silence or evasion will bring
dangerous notice, the hovering hawk
of the state, or the sudden quiet stare
and fatal estimate of an alerted neighbor.

This message we smuggle out in
its plain cover, to be opened
quietly: Friends everywhere—
we are alive! Those moon rockets
have missed millions of secret
places! Best wishes.

Burn this.
Posted by E. Martin Pedersen at 11:55 AM No comments:


Not many sports or other aspects of life can be called Perfect. I guess a bowler can bowl 12 strikes in a row for a perfect 300 score. You can answer every question right and become a millionaire on TV (especially if they tell you the answers beforehand). But every shot a bull’s-eye? Every day of a marriage free from friction? Perfection is a worthy standard, but unattainable, spiritually or in the mini-world of sports. Most of us are stifled by our struggle for perfection. All we do is fail over and over.


Yet Matt did it. The 22nd person in the 136-year history of baseball, with several coming in very recent times, another this year even, so there were decades without a perfect game. Cain’s spent his whole life preparing for this. He exercises hard every day all year. He tries harder. He’s built himself into a pitching machine capable of perfection. He decided as a child and sticks to the plan as an adult. He made the sacrifices. Did you? No. Rather party with your mates or watch reruns of I Dream of Jeanie? Yeah, thought so. Me too.


Cain got a big contract this year, as did Barry Zito a few years ago. But Zito was crippled by the expectation of perfection that those millions carry and hasn’t pitched well since. Cain chugs ahead like a train, unstoppable, unflappable. He has the toughest mental game I ever saw. That’s where pitchers fall apart. One guy, Russ Ortiz, even forgot how to pitch a few years ago. Weird but true; one day he was good, the next he completely forgot how to do that thing. The mental game rules. For us too. You can psych yourself out every day, fullfilling your loser identity, that’s easy. What’s hard is to roll with the punches, face pressure and stress without cracking, be sensitive but don’t let it get to you. Maintain perspective. Care but not too much.


And the pressure in about the sixth inning must have been nearly unbearable. For all the boys on the field. They caught a couple balls that saved Matt’s game for him, their captain. They didn’t throw wide of first but right on the bag. Buster Posey called the game and Cain did not challenge a single pitch. Posey was the brains; Cain the arm. Near the end any lapse by anyone and it’s over. One dribble hit, a good bunt, one hit batter, a hundred things can blow it. Nobody let any of those happen. I think I would have felt sorry for the losers and subconsciously let one through. That’s why I admire Matt Cain, he showed no weakness while staying always human. The best we can be. Afterwards he said, “Wow.” The victor unashamed and unafraid.


That’s baseball. Where the best are rewarded. Doesn’t work that way in my life, my job, my game. But you show the world what you can do and the best go the Cooperstown, the faulty get sent to the minors. Everyone gets what they deserve. And everyone in the stands is down on the field with the boys like shadows. We pull for them like they're our brothers. We feel for every play. I don’t get that from other sports. I mean, Formula One car racing is an extremely popular sport here in Italy. How do you empathize watching that?


If we like metaphors (may the force …) we might go to the story of Cain and Abel in the Qur’an or Bible. The farmer Cain, though a murderer, was the strongest brother, the winner, the survivor. And without pity, Matt Cain killed those Astros, 27 in a row. I never thought I’d see it happen in my whole life.


Baseball teams don’t have captains, but Matt Cain has been the unofficial leader since he came up from the Giants farm system. Or as baseball fan, Walt Whitman, said:


O Captain! my Captain! our fearful trip is done;
The ship has weathered every rack, the prize we sought is won;
The port is near, the bells I hear, the people all exulting …


Mutt: Hello, dear friend, are you excited about the perfecto?
Jeff: Couldn’t care less.
Mutt: Me neither.
Jeff: Got a question that’s been bothering me.
Mutt: Shoot.
Jeff: Bang. Okay, if a mute swears, does his mother wash his hands with soap?
Mutt: Dunno. If a parsley farmer is sued, can they garnish his wages?
Jeff: Dunno. If a stealth bomber crashes in a forest, will it make a sound?
Mutt: Dunno. If a turtle doesn't have a shell, is he homeless or naked?
Jeff: Dunno. If someone with multiple personalities threatens to kill himself, is it considered a hostage situation?
Mutt: Dunno. If the cops arrest a mime, do they still tell him he has the right to remain silent?
Jeff: Dunno. If the funeral procession is at night, do folks drive with their headlights off?
Mutt: We don’t know much, do we?
Jeff: Dunno.
Posted by E. Martin Pedersen at 12:09 PM No comments:

In my constant search for my true self—ain’t we all?—, I asked myself what, or rather who, I think is funny. It’s like a test. I said: Yo, Dude, who do you think is funny? Well, actually, I was jerking around on Youtube, and I bumped into the Smothers Brothers. Oh yeah. I got a few yucks from each vid. Oops, that really dates me, those guys are old men now! But laughs are like gold, dig all you can. You were looking for health pills? You wanted more and better life?

The Smothers Brothers Comedy Hour (the best), Tommy (the funny one), Dickie (the annoying one), Pat Paulsen (still votable), David Steinberg (better than he ever was), Booga Booga! Now that isn’t so funny now, but in context it was because it was such stupid nonsense, like you could say absolutely anything and get a laugh. Whereas the Smothers always had well-written, well-rehearsed, well-timed bits. They were/are the best. And John Hartford was on the show. And Steve Martin and Albert Brooks.

The one I liked most from the pre-60’s was Groucho Marx. And Danny Kaye.

The obvious deduction from all this is that you like what you heard in high school when you first started laughing at grown-up stuff. Maybe so, but maybe comedy doesn’t get better in quality or quantity as the decades roll on. It’s not like computers. Maybe anyone who wants to minister to the humor needy, to doctor our funnybones, to give out the giggles, should look backwards at the masters from whenever, wherever. Some humor gets old, most doesn’t. I think Mark Twain said that.

Mutt: What’s with the boss, a month of golden silence, was he sick?
Jeff: Yes. Had nothing to say.
Mutt: Why is that a problem?
Jeff: T’ain’t. He’s got no contract.
Mutt: We don’t either. Maybe we should move to Wisconsin. Oh, never mind.
Jeff: Heard any good jokes lately?
Mutt: In Wisconsin?
Jeff: No.
Mutt: “Karate is a form of martial arts in which people who have had years and years of training can, using only their hands and feet, make some of the worst movies in the history of the world.”
Jeff: Who said that?
Mutt: I just did … okay, Dave Barry.
Jeff: “If a woman has to choose between catching a fly ball and saving an infant's life, she will choose to save the infant's life without even considering if there are men on base.”
Mutt: Mark Twain?
Jeff: Dave Barry.
Mutt: “Suppose you were an idiot. And suppose you were a member of Congress. But I repeat myself.”
Jeff: I love Dave Barry.
Mutt: That was Mark Twain. And so is, “Sacred cows make the best hamburger.”
Jeff: No way. I got one: "Time's fun when you're having flies."
Mutt: Mark Twain? Dave Barry? George Carlin?
Jeff: Kermit the Frog.
Mutt: Say goodnight, Jeff.
Jeff: Goodnight Jeff.
Posted by E. Martin Pedersen at 8:18 PM 2 comments: