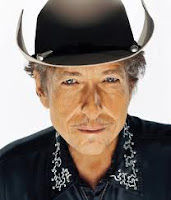 I’ve thought about this. Only one living American deserves the Nobel Prize for Literature: Bob Dylan. If you think of the protest singer cliché proposed by superficial media (the 20-year-old Times are a-Changin’ guy) you miss the point: Bob Dylan is an exceptional writer. His production is mammoth in quantity and consistent quality. Don’t get sucked into dividing his work in periods (Folk, Electric, Gospel, etc.), and don’t, of course, react either way to his other skills: guitar, harmonica and keyboard playing, singing, music writer, producer, his rock star personality and general mystique—forget all that. Lastly, don’t be influenced by the songs that are famous hits because they got more radio play. Read the lyrics.
Read the songs as songs. Songs are songs with their own rules. Dylan has respected and violated them all. Songs are cousins to poems but are not poems. Bob Dylan is not a poet. Sharon Olds is a poet. Dylan is a writer, a song writer. [Actually the texts can't be divorced from the music and performance, but I'm making a point here.] He creates literature more enduring and significant than most. He’s affected the lives of millions. I dare say no American writer ever has had the raw impact of Bob Dylan. Who? Twain, Whitman, Dickinson, James, Hemingway, Who? Dr. Suess? Matt Groening? Who? Hundreds of thousands of boys, for example, are named Dylan in honor of this literary/musical giant. Lives changed. The whole world changed. And his imitative effect on other song-writers …
In high school, Dylan dreamed of being Elvis. They both made musical history (and beautiful music, if you like it), but Dylan also made literary history. From Freewheelin’ to Together Through Life, Bob Dylan has consistently written fine literary lyrics. “Like a Rolling Stone,” “A Hard Rain’s a-Gonna Fall,” “Knockin’ on Heaven’s Door,” “Just Like a Woman,” “Love Sick,” “All Along the Watchtower,” “Shelter from the Storm,” “Not Dark Yet,” “Forever Young,” “Hurricane,” “Blind Willie McTell,” “Gotta Serve Somebody,” “Working Man Blues,” etcetera. Hundreds of ‘em.
Get all the forty-some records of original material and listen to them all (you masochists). Instead of the highs and lows that everyone talks about, I hear a master at work throughout (which doesn't make every work a masterpiece). I hear writing so hard it seems easy. I hear a child making nonsense rhymes in the playpen combined with Grandpa giving precious advice on living. Contemporary rock 'n roll (teenage fans filling stadiums for a 70-year-old?) combined with ageless tradition, rich oral-musical-literary tradition. Bob Dylan knows his stuff (music and lit.): listen to his fantastic radio show (Theme Time Radio Hour on XM Satellite Radio), you’ll see.
So to celebrate Dylan’s seventieth birthday, May 24, 2011, I officially propose he be given the 2012 Nobel Prize for Literature. Sweden, are you listening?
Plus, a student of mine told me today that her favorite song is “Bowling in the Wind.”
My three favorite Dylan records (you tell me yours):
1. Oh Mercy
2. Modern Times
3. Time Out of Mind
Happy trials, Martin
Mutt: How nice to see you again, my friend.
Jeff: How nice to be seen at all.
Mutt: Got a story.
Jeff: Can I stop you?
Mutt: A frog enters a bank looking for a loan. He approaches the loan officer, Patty Black, and makes his request known. Taken somewhat aback, she tells him the bank doesn't normally make loans to frogs.
"But please," says the frog, "I really need this loan."
"Do you have any collateral?" asks Ms. Black.
"Only this," he says. And with that, the frog pulls from his pocket an object and hands it to Ms. Black. Not knowing what it is, but being too embarrassed to say so, she takes the object to the bank manager and explains about the frog and his request for a loan.
"Sir, I don't even know what this is, but it's all he has for collateral," she tells him.
The manager takes the objects, looks at it for a moment, hands it back and tells her, "Why, it's a nick-knack, Patty Black, give the frog a loan!"
Jeff: A musical funny?
Mutt: Yeah, in honor of His Bob-ness. This old man is rolling home.
Jeff: Whatever.
Posted by E. Martin Pedersen at 7:23 AM 5 comments: 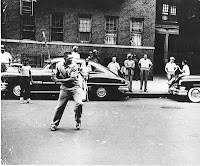 Baseball Canto
Watching baseball
sitting in the sun
eating popcorn
reading Ezra Pound
and wishing Juan Marichal
would hit a hole right through
the Anglo-Saxon tradition
in the First Canto
and demolish the barbarian invaders
When the San Francisco Giants take the field
and everybody stands up to the National Anthem
with some Irish tenor’s voice
piped over the loudspeakers
with all the players struck dead in their places
and the white umpires like Irish cops
in their black suits and little black caps
pressed over their hearts
standing straight and still
like at some funeral of a blarney bartender
and all facing East
as if expecting some Great White Hope
or the Founding Fathers
to appear on the horizon
like 1066 or 1776 or all that
But Willie Mays appears instead
in the bottom of the first
and a roar goes up
as he clouts the first one into the sun
and takes off
like a footrunner from Thebes
The ball is lost in the sun
and maidens wail after him
but he keeps running
through the Anglo-Saxon epic
And Tito Fuentes comes up
looking like a bullfighter
in his tight pants and small pointed shoes
And the rightfield bleachers go mad
with chicanos & blacks & Brooklyn beerdrinkers
“Sweet Tito! Sock it to heem, Sweet Tito!”
And Sweet Tito puts his foot in the bucket
and smacks one that don’t come back at all
and flees around the bases
like he’s escaping from the United Fruit Company
as the gringo dollar beats out the Pound
and Sweet Tito beats it out
like he’s beating out usury
not to mention fascism and anti-semitism
And Juan Marichal comes up
and the chicano bleachers go loco again
as Juan belts the first fast ball
out of sight
and rounds first and keeps going
and rounds second and rounds third
and keeps going
and hits pay-dirt
to the roars of the grungy populace
As some nut presses the backstage panic button
for the tape-recorded National Anthem again
to save the situation
but it don’t stop nobody this time
in their revolution round the loaded white bases
in this last of the great Anglo-Saxon epics
in the Territorio Libre of baseball
Lawrence Ferlinghetti  (age 92)
Posted by E. Martin Pedersen at 6:52 PM No comments: