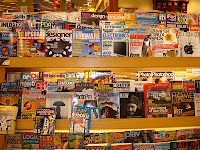 At the hip left-wing bookstore there are lots of little rooms full of theme-related books: Marxism for the 21st Century, Feminism for the 21st Century, the history of the union movement (for intellectuals to read on the summer beach), Gramsci, Trotsky, De André, non-violent children’s books, the Sexual Orientation room, the Che Guevara room, and the Little Magazine Room. Every month, Neal likes to get a certain music mag to follow Bob Dylan’s latest shenanigans.

I waited outside on the sidewalk. The people who worked in the cooperative bookstore (the workers) were so chronically depressed and grouchy that they put a funereal pall over whatever brightness might have come from the collected works of François Marie Charles Fourier.

Neal went straight to the back to get his magazine. The political and musical magazines were arranged on a handsome tiered wall-rack of tan wood with low slots so that they all faced the customer, staggered down to the floor like a strip mine. There were hundreds of flimsy, over-priced publications in that rack, all balanced, upright and beckoning. Someone had arranged them like flowers.

With his characteristic enthusiasm, Neal reached out his arm and grabbed his favorite from one of the top shelves, but the corner of Neal’s magazine touched the corner of the magazine next to it pulling it forward. And that one nudged the one next to it and so on.

Talk about dominos. The magazines falling from the upper shelves tapped the ones below and they cascaded downwards onto the floor at Neal’s feet. To his credit, he tried to stop this periodical avalanche, first swatting with his hands and then, since the magazine rack was inclined, he tried to keep a couple magazines from falling by holding them with his knees. “Help,” he muttered meekly to no one. Neal was alone in the magazine room.

Panic. The hundreds of magazines were clicking down one by one to the floor like a Jacob’s ladder toy. Neal spread out his arms to try to hold some in place, save the savable at least; he even held some with his elbows. His legs were bowed outwards like a rock climber on sheer granite.

Then Neal lost his balance and could not remain vertical any longer. On tiptoes, he slid forward about a foot, against his healthy belly, just enough so that he could not return upright. His forehead resting against the magazine stand, saving the last few magazines, the main pile around his ankles, he was stuck, unable to right himself. Neal whispered, “help,” again.

I think I’ll leave Neal spread-eagled there, pressed against the magazine display in an extremely compromising (criminal and/or sexual) position with his left hand saving La Rivista del Manifesto and his right hand saving from the fall a photocopied collection of love poems from prison by Francesca Mambro. Kissing the rack, so to speak.