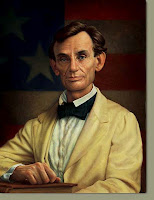 "Why waste your money looking up your family tree? Just go into politics and your opponents will do it for you." -- Mark Twain
As you know, if you know, if you care, if you’re still reading, hello?, I have traced my lineage back to four U.S. presidents (see below: Dropping Names on my Foote). Is that something to brag about? Considering who they are? Curious? Taft was the best. The others are Nixon and the Bushes. Oh well, oh hell, hell’s bells, ding dong.
They say that several hundred thousand, if not million, Americans can trace back to cousinship with George W., so I’m not alone. Barack Obama is another distant relation of his predecessor’s. Okay.
But there’s news, big news! We’re all children of Adam & Eve? No, I found another claim to everlasting fame. Let’s see if I can get this right. My ancestor on my maternal grandfather’s side is Casper Strahl (1729-1799), who was named Casper von Strahlheim in Austria/Germany. His name was changed when he landed in Philadelphia in 1750 as an indentured servant with a contract for eleven years of servitude in exchange for passage. Twelve years later he married Rebecca Barger, a Quaker, who was disowned by the Society of Friends until her husband and children joined the Society. Casper and Rebecca had a son, Phillip, who had a son, Casper.
In 1817, Casper married Mary Todd, 17, in Warren, Ohio. They farmed and raised 8 children and moved to Salem, Iowa in 1844. Mary died in 1869 and Casper in 1873.
Mary Todd was the daughter of Stephen Todd and Sibellia Williams. Stephen was the grandson of John Todd, a Presbyterian minister in Virginia. John Todd was the brother of Levi Todd, grandfather of another Mary Todd, a second cousin to Casper’s wife. She was from one of the leading families of Lexington, Kentucky, but moved to Springfield, Illinois to live with her sister.
After a tempestuous courtship, this Mary Todd married a young lawyer named Abraham Lincoln in 1842. They had four children, but only one lived to adulthood. Mary Todd Lincoln was First Lady of the United States from 1861-1865. Her cousin, Mary Todd Strahl (and Casper) had a son named William, who had a son named Charles, who had a son named Jesse Elvin Strahl, my grandfather. He was a sweet quiet man, a Republican like Lincoln. I was 14 when he died, and it was only many years later that I realized how I missed him.
Happy trials, Martin
Mutt: Name dropper!
Jeff: Don’t you hate that? What is he, better than us just because he has distant relatives who’re famous?
Mutt: You don’t like history, do you?
Jeff: Nah, you?
Mutt: Well, I do know that in 1905 the formula for rouge was reddy.
Jeff: In 1909 rodent traps were invented with hope that a lot of people would gopher them.
Mutt: Also in 1909 the first magician appeared on stage – he was so bad, he made the audience disappear.
Jeff: In 1911 the first radical engine was marketed – the inventor said, “Diesel be very good.”
Mutt: In 1911 the first pill to cure headaches was introduced, but people found it hard to swallow.
Jeff: In 1912 the first ceramic coffee mug was invented by a couple of guys – everyone said they made a nice cupple.
Mutt: In 1913 valentine-shaped candy boxes were made for sweet hearts.
Jeff: In 1914 the Panama Canal locks opened, but they forgot the cream cheese.
Mutt: In 1915 pancake makeup was invented, but most people still preferred syrup.
Jeff: In 1920 the branding iron was invented – the cattle were really impressed.
Mutt: In 1924 Thomas Jack, an Englishman, invented the automated packaging machine – he was known as Jack the Wrapper.
Jeff: In 1925 card playing reached the pinochle of success.
Mutt: In 1931 the first shipment of hot dogs to the U.S. arrived from France – to pay off a foreign debt of 3 million francs.
Jeff: In 1932 a banana-skin briefcase was made – for lawyers who wanted to appeal their cases.
Mutt: In 1933 card playing was first banned aboard naval vessels – ships lost their decks.
Jeff: In 1935 the first greyhound raced behind a restaurant – the biggest bet was made by a man with a hot dog.
Mutt: In 1945 the first all-white Dalmatian dog was spotted.
Jeff: In 1948 the first dentist was hired by the National League to put on baseball caps.
Mutt: In 1949 the first tightrope walker was hired by a circus – he was high-strung.
Jeff: In 1951 vegetable farmers from all over the world held a meeting – it was the first peas conference.
Mutt: In 1958 two men invented the radial tire – everyone said they made a nice spare.
Jeff: In 1961 the skateboard was invented – it was a wheelie good idea.
Mutt: In 1968 pantsuits for women became fashionable, but ladies tried to skirt the issue.
Jeff: I guess that says it all.
Mutt: Oowah!
Jeff: Double Oowah!
Posted by E. Martin Pedersen at 12:50 PM No comments: