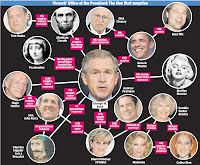 There is this to be said in my defense. Almost anyone who can trace their ancestry back to the colonial period in American history is related to some presidents. The Bush family is related to just about everybody: fourteen other presidents (inc. Washington, Lincoln and Roosevelt), Winston Churchill, Princess Diana Spencer and John Kerry. There are hundreds of thousands, if not millions, of Americans who are distant relatives of the ex-pres (including Barack Obama). Oh wait, that makes me some extreme distant relative to George’s successor too. I feel better now. (Though I'm tiring of everyone yelling, “Barry, clean up the mess FASTER!!!”)

In case you need a good cry, I found this list on a site about presidential jokes:

Past Work Experience:
* Ran for congress and lost.
* Produced a Hollywood slasher B movie (The Hitcher).
* Bought an oil company, but couldn't find any oil in Texas; company went bankrupt shortly after all Bush stock sold.
* Bought the Texas Rangers baseball team in a sweetheart deal that took land using taxpayer money. Biggest move: traded Sammy Sosa to the Chicago White Sox.
* With father's help (and his name) was elected Governor of Texas.

Accomplishments in Previous Positions:
* Changed pollution laws for power and oil companies and made Texas the most polluted state in the Union.
* Replaced Los Angeles with Houston as the most smog-ridden city in America.
* Cut taxes and bankrupted the Texas government to the tune of billions in borrowed money.
* Set record for most executions by any governor in American history.
* Became president after losing the popular vote by over 500,000 votes, with the help of his father's appointments to the Supreme Court. 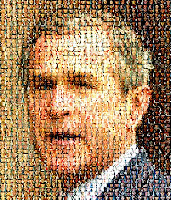 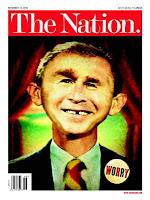 You can tell this list is out-dated, and you might contest a point or two (or add others), but the big picture remains: What, Me Worry?

Wow this is a great resource.. I’m enjoying it.. good article