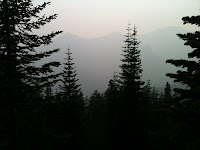 I was having a hard day, not because it was 20 miles between highway 3, Scott Mountain Summit, where I’d camped and highway 93, Carter Meadows, my proposed destination—Siskiyou County, Northern California—but because it started with several miles straight up hill; then it leveled; then it went up some more. ‘It’ being the trail. Yeah, this is a trail story, sort of.


I knew there were fires up ahead (usually are), but I needed to get to Etna, California, to rest a couple days. You know when you need a break or you will break? So I was climbing—left knee going wah wah wha—and determined to get to the next road, an illusion of safety perhaps, a way out. I crossed a ridge at lunchtime, and the smoke got a lot thicker. The fire was near enough to smell; then my eyes watered; then I started to cough. I was climbing into hell.


I met only one guy all day coming the other way. He was my age, taller, stronger, with a much larger pack that looked home-designed, very neat. He said he was sure glad to get out of the smoke he’d been walking through for a week. He said he could finally breathe; I said I have minor respiratory problems.


I knew the trail wasn’t officially closed, though people were evacuating. The Russian Wilderness fire, the Marble Mountain Wilderness fire, the Etna fire, these were not right next to the trail, I’d heard, but one can’t help wondering as the smoke gets thicker and thicker. All afternoon I kept telling myself that flames would not appear around the next bend, up the next rise. Plus I absolutely had to get to the highway because that was the plan. All this weighed on my mind as I walked through the dark forest completely alone.


Out of the blue, all of a sudden, without warning, right beside me on the left, ten feet away, a tree branch comes crashing to the ground. A six foot long branch fell out of a tree and slammed to the ground right as I passed. I screamed, of course. Stopped a few feet ahead, looked at the branch—it was dry; lots of trees are diseased or burnt these days—and then I started laughing out loud, really loud, alone with the spirits. I echoed as I laughed for a while at the absurdity. What just happened? Why me? Who is trying to communicate what? Of all the times to fall …


I got to the highway, and friendly Sheriff Chris Callahan drove me to Yreka. The smoke continued clear to Oregon and the Etna wildfire would continue, he explained, until it rained. There was even a freak landslide blocking the only road the fire fighters could use to get to the blaze. Almost as bizarre as a tree limb falling right next to a lone hiker as if some joker were throwing it at him from above. BLAM!


Maybe the tree was thinking, “If I fall in the woods, and nobody’s around to hear me, do I really exist?”

Mutt:  For the love of Mike, it’s Sir Jeffery, the supreme wit.
Jeff:  Hello Mutt. Can I tell you a sad story about my girlfriend?
Mutt:  I already don’t believe it. You’ve never had a girlfriend.
Jeff:  Yeah, well. Penny was a hard working, conscientious girl, who lived on her own. Her dream in life was to go on an ocean cruise around the world. So she scrimped and she saved until finally, one day, she had enough money to go on her ocean cruise. She booked passage on a cruise liner - first class all the way. The cruise started off in a grandiose scale, dancing and parties every night. But Penny was a cautious girl, so she never drank, but just danced the night away.
One night, after they had been at sea for a week, Penny was walking back to her cabin, when the heel on her left shoe broke throwing her off balance. If that wasn't enough, the ship chose that moment to tilt to the left. As a result, Penny was thrown overboard. A hue and a cry were immediately raised, and after about five minutes they found Penny. Hauling her aboard, the ship's crew realized that it was too late, poor Penny was dead.
Normally, they would have done a burial at sea, but as I said before, Penny was a very conscientious girl, and had written a will. In it, she specified that she wished for her body to be cremated, and kept in a jar on her parent's fireplace mantel. Her wishes were fulfilled, which just goes to show you that a Penny saved is a Penny urned.
Mutt:  That just goes to show me I should have gone to the races today.
Jeff:  If you want I’ll tell you how I met Penny.
Mutt:  Shoot. Take me out of my misery.
Jeff:  I was dining in a fancy restaurant and there was a gorgeous redhead sitting at the next table. I had been checking her out since I sat down, but I lacked the nerve to talk with her. Suddenly she sneezes, and her glass eye comes flying out of its socket towards me. I reflexively reached out, grabbed it out of the air, and handed it back.
“Oh my, I am so sorry,” the woman said as she popped her eye back in place. "Let me buy your dinner to make it up to you.”
We enjoyed a wonderful dinner together, and afterwards we went to the theater followed by drinks. We talked, we laughed, she shared her deepest dreams and I shared mine. She listened. After paying for everything, she asked me if I would like to come to her place for a nightcap and stay for breakfast.
We had a wonderful, wonderful time. The next morning, she cooked a gourmet meal with all the trimmings. I was amazed. Everything had been so incredible.
“You know,” I said, "you are the perfect woman. Are you this nice to every guy you meet?"
“No,” she replied, "You just happened to catch my eye."
Mutt:  Do you know the expression ‘too much information’?
Jeff:  Let’s go to the races anyway. I feel lucky.
Mutt:  I feel woozy.
Posted by E. Martin Pedersen at 7:29 AM No comments: