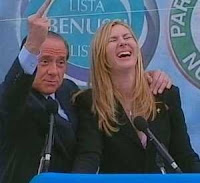 I’m writing this not to explain Italian politics to my faithful readers on the day after the weirdest election in history, but I’m merely trying to understand it myself. An election with no winner? What happens now?


I’ll begin by reminding myself that Italian representative democracy really began after WWII, and that each government rewrites the rules to their advantage (cheats), so that there’s very little democratic tradition to build on. Something like the U.S. at the time of William Henry Harrison. A troubled youth.


Italians have the highest tolerance for chaos I can imagine. No functionable government, a problem? Nah. Another election (150 million euros)? Sure, bring it on. They enjoy the comedy, the sport, the endless barstool debates. They joke about Berlusconi (on trial for numerable serious crimes, including pedophilia and running a prostitution ring). He’s the most famous/infamous Italian politician, and he acts like a class clown. Or a trickster actually, from ancient folktales. Making and destroying our world.


Why would anyone vote for the old man who failed as Prime Minister and then supported the Monti government only to betray it? His ties with organized crime are undeniable. He called the judiciary “worse than the Mafia” on the eve of the election. He justified bribery as a “necessary practice.” His billions are hidden in offshore accounts to avoid paying the taxes he promises to cut but actually raises. Etc. etc., so many scandals they don’t count.


I don’t know a single person who will admit to having ever voted for Berlusconi. I’d like to talk to one, to find out why. What they hope he will do that he hasn’t done already. How they view his counter-reform program, taking everything public apart piece by piece. Nobody, yet some 10 million people voted for him. He won big in Sicily. Aren’t they ashamed, you ask? I’m afraid not. But everyone was shocked, the polls all wrong. The egg-faced Democratic candidate, Bersani, had been celebrating his victory for weeks before the vote.


Somebody proposed a two-party system once. Didn’t fly. So when four parties who cannot get along each get roughly a quarter of the vote, what happens? More chaos. The Battle Royal. Big Time Wrestling. Entertainment.


Parties? Are there political parties in Italy? I suppose the Democratic Party is a normal political party, though somewhat of a dinosaur, which means career politicians. That’s another thing that this election meant. A stiff middle finger at all career politicians. So Grillo’s 5-star Movement plan is to have young ordinary citizens run the country for a while on the theory that they can’t do any worse. But parties? A single person is not a party. A tycoon (Berlusconi), or a technocrat (Monti), or a comic (Robin Williams, uh, sorry, Grillo), cannot be, by definition, a political party, yet they are. That’s something that maybe needs a little work.


As does the idea of right-wing conservative versus left-wing liberal. Lost in Italy. Berlusconi and Grillo want Italy out of Europe, for example. The Northern League wants three northern states to secede from the country. Or at least they say they do. That fiery rhetoric gets lots of votes, but they were in power for nearly 20 years and didn’t cut the country in two. No more taxes gets lots of votes too. Berlusconi promised to return last year’s property taxes. With what money, you ask, who cares, we all know he’s lying. The others charged him with trying to buy votes, which he’s always done anyway. Like reality television, we know it’s all staged and like it because it’s so “real”. The truth is lost in overlapping smoke screens. Or maybe there is no truth back there. How should I know?


Grillo’s success is largely anti-political. They’re all rotten. Kick ‘em out. Majority and minority equally guilty. Yeah, well, true and not true. I read the 5-star program and liked many points, but I didn’t vote against governing the country. As John Wayne would say, “It’s a dirty business, but somebody has to do it.”


So I continue, as a foreigner, to be non-plussed by Italian ways and means. Or self-mutilation. Or love of carnival anarchy. Mussolini, who Berlusconi praises frequently, said, “it’s not hard to try to govern the Italians; it’s pointless.” Or words to that effect. Plus tomorrow everything'll change again. Still I have a lot of questions.


Oh, by the way, what’s the REAL reason the Pope quit?

Mutt:  Speaking of which, did you hear about Walt Disney?
Jeff:  Did he run for political office or the papacy?
Mutt:  No, but he didn’t die either. He’s in suspended animation.
Jeff:  I have a question.
Mutt:  Just one?
Jeff:  Yeah. What do you do when you see an endangered animal that is eating an endangered plant?
Mutt:  Okay. What's another word for thesaurus?
Jeff:  When companies ship Styrofoam, what do they pack it in?
Mutt:  When it rains, why don't sheep shrink?
Jeff:  When sign makers go on strike, is anything written on their signs?
Mutt:  When you open a bag of cotton balls, is the top one meant to be thrown away?
Jeff:  Where do forest rangers go to "get away from it all"?
Mutt:  Why do people who know the least know it the loudest?
Jeff:  Why do they lock gas station bathrooms? Are they afraid someone will clean them?
Mutt:  Why do they report power outages on TV?
Jeff:  Why is the word abbreviation so long?
Mutt:  Why isn't there mouse-flavored cat food?
Jeff:  Would a fly without wings be called a walk?
Mutt:  I think that’s enough.
Jeff:  I’m going to vote again.
Mutt:  Again?
Jeff:  Sure, come on, it’ll be fun. I’m voting Mickey Mouse.
Mutt:  Goofy for me. Whoopee!
Posted by E. Martin Pedersen at 9:22 AM No comments: