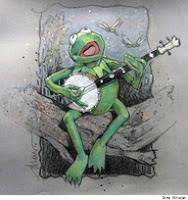 I wrote these three articles in the 1980’s, and I post them now because they should remain relevant given the topic. As you can see, I had some trouble with re-formatting and there may be some errors, but I hope they will be useful to someone.

In 1985-6, I got a Masters degree in Independent Studies/Special Major: Folklore & Education from San Jose State University. It was a very positive experience; I found teachers, especially my advisor, cultural anthropologist James Freeman, who were willing to give me the latitude to explore whatever interested me.

I worked my butt off. Doing far more on my own than if I’d followed any standard course of studies. That’s what made it so great. My thesis was 420 pages, but I cut out at least that many again.

My academic interests and my music have taken different directions, naturally, since then, yet I am fond of these early papers because they remind me of the person I was back then. An enthusiastic fellow with a long beard, working several jobs, classes and library study until late, writing into the night, alarm at six, do it again.

I believed that the world needed to hear what I had to say. Now I write more, but I’m less sure.

Quite similar actually to the Henry Miller trilogy, The Rosy Crucifixion (Sexus, Plexus, Nexus). Okay, maybe not that similar.

Mutt:  For the love of Mike, it’s my long lost pal Jeffery!
Jeff:  You saw me yesterday at the races, Mutt.
Mutt:  Well, I’ll be a monkey’s uncle!
Jeff:  I read in the Times that they arrested a monkey for throwing Rhesus feces at zoo attendants. Was he your nephew?
Mutt:  I don’t know. What was the charge?
Jeff:  Turd debris assault.
Mutt:  I don’t know. But I do know that a chicken crossing the road is poultry in motion.
Jeff:  I know that a boiled egg in the morning is hard to beat.
Mutt:  I know that when a clock is hungry it goes back four seconds.
Jeff:  And I know that a bicycle can't stand alone because it is two-tired.
Mutt:  Watch out, if you don't pay your exorcist you get repossessed.
Jeff:  Have no fear. The man who fell into an upholstery machine is fully recovered.
Mutt:  Do you think it’s true that every calendar's days are numbered?
Jeff:  I don’t know, but I do know that those who get too big for their britches will be exposed in the end.
Mutt:  And I know that those who jump off a Paris bridge are in Seine.
Jeff:  So that leads me to my final question: What's the definition of a will?
Mutt:  I know this, I know this.
Jeff:  It's a dead giveaway.
Mutt:  See, I knew it.