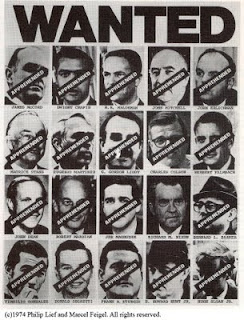 This post is about the current Italian political situation.
In the summer of 1973, I applied for a job at Yosemite National Park, where my mother had worked many years as a young woman, but they didn’t take me. Too late to find another job, I stayed home with my little brothers and started my first novel (since burned).
I also watched television obsessively, like most of the rest of the country. The Watergate hearings were broadcast every day. My mother and I discussed them at supper. My grandfather (a Nixon supporter) and I discussed them every Sunday. History was being made, and we knew it.
Nixon was the enemy when I was young. He represented the Establishment, the War, repressive conservatism of adults against youth, the cops busting heads at peace demonstrations, Evil. When four students were killed at Kent State, Richard Nixon pulled the trigger. And lots of other bad stuff. He didn’t like our rock music; we didn’t like his greasy short hair.
When Nixon abused his power to halt the investigations, lied about everything, fired anyone who tried to get in his way, thought he was invincible, above the law, then he was finished. The wounded beast is the most dangerous, however; it’ll hurt you as it lies dying, if you get too close. Nixon was soundly re-elected while the Watergate break-in investigations were beginning. The beginning of the end.
Everyone knew Tricky Dick was rotten, and we were merely curious to see when and how he’d fall from grace. There’d always been something sleazy about him; from back in the Eisenhower days he had trouble seeming honest. You wouldn’t buy a used car from that man. When my grandfather heard Nixon’s bitter cussing on the tapes, he turned on him too. “I never expected him to be like that.” We saw behind the mask. And it was all over.
But we had the process to respect. The steps to follow included daily special news broadcasts all summer long. The independent counsel investigations and Senate questioning of witnesses with the threat of perjury charges, the Washington Post articles of Woodward and Bernstein. Deep Throat, Expletive Deleted, and the Smoking Gun.
After Nixon resigned to avoid impeachment, I was infuriated by the next development. Ford’s first act was to pardon Nixon so that he would never do prison time. That didn’t apply to his associates, his co-conspirators, his thugs (see famous poster), most of whom spent months or years in the joint. Strange perhaps, given that they all worked for the man who gave the orders. In the following years, people have said that what Nixon did was not so bad, but he was guilty of 1) obstruction of justice, 2) abuse of power, 3) contempt of Congress. That sounds pretty serious to me. Plus so much more that was never proven because he never went to trial.
There’s a saying written on the wall of every courtroom in Italy: The Law Applies Equally to All. Period.
When Richard Nixon was running for president in 1968, he made a pathetic cameo on Rowan and Martin’s Laugh In, by saying the famous catch phrase: “Sock it to me!” Six years later, we did.
Here’s a popular expression in the United States: The bigger they come, the harder they fall.
And here’s a quote from Abraham Lincoln: You can fool some of the people some of the time, you can fool some of the people all the time, but you can’t fool all the people all the time. 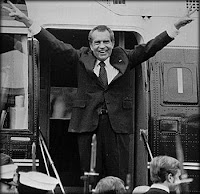