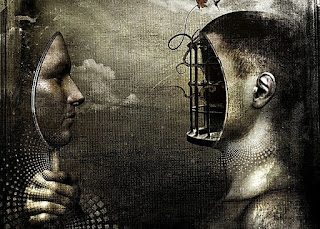 Maybe we aren't ready. For enlightenment. Maybe the recent election is a message about the work we haven't done on ourselves. We, as Americans, seem immature, spiritually unprepared for our present or future. Our cell phones are progressing so fast because they're machines, objects that we focus on. Humans need generations to progress, if we really do. When I was younger I pointed to the end of slavery as proof of progress, but now they say there are more slaves (many sex slaves, many children) in the world than ever before. What kind of human being is involved in human trafficking? How can we invite them into our family?

What kind of selfishness is dominating our world? The bullying, the hatred, fear-mongering, the obsession with money. In our literature bullies are the evil villains, when did they become heroes? We humans, we Americans, can't separate ourselves by who we voted for; we all need to do better, be better. But that takes decades, right? And it's not linear or measureable. We're not machines that can be upgraded to newer models. It's hard to be better. And we're lazy.

Since I was a boy I've seen progressively less open racism (until now). Were people just hiding their bigotry and fear because it was unpopular to voice or did they really change inside? What does deep change take? Education, meditation, legislation? Sesame Street?

Women (who we all come from) have been stifled and abused for millennia, now can they finally be truly equal to men? Well, hell yes! Except that it doesn't seem to be happening. Like there's an ominous Trump-shaped male shadow stalking behind every free strong woman. Such an easy thing as equal pay, which most countries in Europe take for granted, is so hard to pass. In a male-dominated Congress. Such an easy thing as a female president ... Such need for protection, yet one third of all women ...

I'm confused. I feel inadequate. Not up to the task. Global-warming, for example, is so huge and I'm so small. My part in the disaster or the solution is so unclear. And we're all called to save our world, but we're not superheroes. It'll take hard work, lifetimes of commitment. I feel I need to work on myself to prepare, like a samurai swordsman or a concert violinist I need constant practice and training to be able to take on the dark side and win. Yet action can't wait; I still have to get the job done now.

So it's stretch, smile, focus on love and justice and peace, and get started on my new day.

Mutt and Jeff get back tomorrow from their ocean cruise on the Titanic.