Neal in a Blind Rage 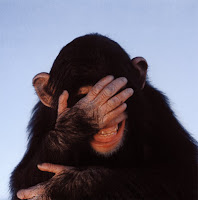 It was a hectic day at the office. Very hectic and trying indeed. Most of our 1,300 students were outside in the crowded hallway, and they all wanted to know something from us. They all had a question. We weren’t getting anything done.

Neal got fed up and wrote a hasty note about when the new exam date was (or something) and taped it on the outside of the door. He dusted off his hands as he came back in and said, “That ought to keep out the zombies!”

It didn’t. As Neal tried to get back into the towering piles of written exam papers we had to correct, several other students stuck their heads in the door, as they do, and timidly asked about whatever. Neal was about to blow a gasket.

It’s not like he’s never made a fool of himself before. He has a habit of accosting people on the street as long lost friends only to discover that they are total strangers. Then he makes it a thousand times worse by trying to explain. Neal also has a tendency to loudly use foul language when he thinks no one around can understand English, only to discover that a cruise ship has deposited hundreds of fellow Brits right next to him. Shocking.

Flatulence in a crowded lift … check. Standing by a huge mud puddle in the road when car races by … check. Neal looks in the upturned ketchup bottle to see why the ketchup is stuck … slap, plop, check. Glasses of wine knocked over onto people’s laps … a regular occurrence.

This time he was unusually peeved, perturbed and downright hysterical. Got up, as grandma would say, on the wrong side of the bed. It was pointless for me to suggest self-control. “The next person who interrupts me gets his arse chewed off,” Neal promised.

As if on cue, a nerdy looking boy with odd dark glasses pokes his head in the door and opens his mouth to say something. Before he could even talk Neal exploded:

“DON’T BOTHER ME! I’VE HAD ENOUGH! CAN’T YOU READ THE SIGN ON THE DOOR! WHAT ARE YOU, BLIND OR SOMETHING?!”

You know the feeling when you hear your own stupidity echo off the walls? Neal let the poor boy have it so viciously that he scared himself. I watched, frankly amused, for the next development. I could see the boy’s white cane tip through the crack in the door near his feet.

“WHAT’S YOUR PROBLEM? I CAN’T GET ANY WORK DONE AROUND HERE WITH ALL THESE INTERRUPTIONS! WHAT’S THE MATTER WITH YOU? …”

And Neal just had to stick his whole foot completely into his mouth with one more rhetorical question:

The boy with the white cane entered, thinking it only courteous to answer. “Yes, I am blind. Could you please tell me when the exams will be?”


Mutt: A neutron goes into a bar and asks the bartender, "How much for a beer?" The bartender replies, "For you, no charge."
Jeff: Two atoms meet. One says, "Are you all right?"
"No, I’ve lost an electron!"
"Are you sure?"
"Yes, I'm positive!"
Mutt: Two antennas met on a roof, fell in love and got married. The ceremony wasn't much, but the reception was excellent.
Jeff: A jumper cable walks into a bar. The bartender says, "I'll serve you, but don't start anything."
Mutt: When she told me I was average, she was just being mean.
Jeff: The more things change, the more they stay insane.
Mutt: That’s deja moo.
Jeff: Right. The feeling that you've heard this bull before.
Posted by E. Martin Pedersen at 6:47 PM 1 comment: