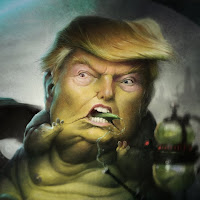 Donald Trump, President of the United States. I can write it, but I still can't believe it. Representing the worst in us, the most vulgar, petty, mean and violent. So how's he doing so far? Did he rise to the occasion and surprise us by being presidential? Quite the contrary. He's building ruin, destruction, mayhem.

Oh boy, that's horrible. It's the old match metaphor: years of hard work to build a house, just one match to burn it down. Is Trump doing better at home, where he says he is concentrating his goodwill at the expense of the rest of humanity? (Does he have any humanity? Does he know what being a refugee means? Can he feel the suffering of others?)

Some critics have called the barrage of Executive Orders, meant in part to confound the opposition (it's working), un-American. Un-American would mean in contrast with our values, history and laws. Evidently the Trumpists and the Hillary-supporters (the majority) do not share values. The ACLU and the KKK do not share values.  Then let's talk about history. Andrew Jackson, the corrupt, vindictive racist is not a president to admire. Okay, let's talk about recent history. "The United States is in a disastrous state and corruption and degradation has been rampant for decades. Carnage." Um, I don't think I want to talk about recent history because Trump seems to have been living in an alternate reality. Nightmareland. Not-Great America waiting to be saved.

So let's talk about the law, something we can all agree on. The Constitution. The first amendment: freedom of religion (severely threatened for non-Christians and non-believers), freedom of speech (they're checking people's Facebook posts in airports), freedom of the press (DT: journalists who are not government mouthpieces should be terminated), freedom of assembly (tear gas and arrest for protestors, see Dakota), freedom to petition (totally ignored millions of signatures). Every Italian knows that a clique that runs the show through repression of the people's will is called "Fascism." Look it up.


Mutt: Looks like bad jokes are needed more than every.
Jeff: Here we go.
Mutt: What's a witch's favorite school subject?
Jeff: Spelling.
Mutt: What kind of lights did Noah have on the ark?
Jeff: Floodlights.
Mutt: What do you call an Italian with a rubber toe?
Jeff: You got me, what?
Mutt: Roberto.
Jeff: P.U. I had a dream last night that I was a muffler.
Mutt: Really?
Jeff: I woke up exhausted.
Mutt: Did you hear about the optometrist who fell into a lens grinder and made a spectacle of himself?
Jeff: Two antennas met on a roof, fell in love and got married. The ceremony wasn't much, but the reception was excellent.
Mutt: They told me I had type A blood, but it was a type O.
Jeff: I'm reading a book about anti-gravity. I just can't put it down.
Mutt: I stayed up all night to see where the sun went, and then it dawned on me.
Jeff: I changed my iPhone's name to Titanic. It's syncing now.
Mutt: I don't know what that means.
Jeff: Never mind. What you seize is what you get.
Mutt: Can I tell an English teacher joke?
Jeff: No.
Mutt: Please.
Jeff: No.
Mutt: Okay, past, present and future walked into a bar.
Jeff: I said no.
Mutt: Wait for it. The situation was ... tense.
Jeff: No.
Mutt: Sorry. Forgive me.
Jeff: Good night.