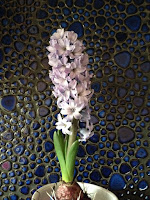 When of thy earthly goods
Thou art bereft
And in thy hand
Two coins are left
Buy bread
And with the dole
Buy hyacinths
To feed thy soul.


My mother gave me this poem on my 16th birthday, along with a hyacinth bulb, a note of instructions on how to care for it, a pot with soil, and a change in house rules allowing me complete freedom of movement (just bring the car home by 7 am) and a raise in allowance on the condition that I buy all my own clothes. I was a grown-up. I could take poetry. Best gift of my life. I still grow hyacinths. Guess why.

Posted by E. Martin Pedersen at 8:18 AM No comments:

Imagine it if you can. No flushing, no showers, no drinking, no cooking, no dish-washing, no clothes-washing, no water for bars and restaurants to cook with, no water in schools and public buildings for the toilets, imagine the sick and elderly, the large families, the stink, the filth, the risk of epidemic. All the plastic bottles of bought water, will they be recycled? All the 10 and 20 liter jugs, bought for anywhere from 3 euros to 18 each, will they ever be used again? Of course they will. The system is broken, a bandaid won't fix it. This happens almost every year, just not for so long.

Actually, we've had a tiny bit of water in our building because an Army water truck filled our tank a couple times. We also bought a lot of water (ya think someone's making big bucks on our suffering?), and we've learned some things in these weeks.

It is possible to shower and shampoo from a 1.5 liter bottle.
Washing dishes by hand in the sink takes several liters but can be done.
The washing machine, however, doesn't work without water.
When you wash your hands from a bottle, one hand soaps the other pours, rinse, repeat.
Tempers flare in times of crisis. Duh.
All the managers and politicians involved should just quit regardless of demonstrable culpability. We are sick of you.
That huge chunk of the world that never has running water and us are closer now. Not feeling it, but feeling it.

Sicilians are very good at some things, though I can't think of what they are right now, but maintenance and fixing what's broken is not one of them. They say it'll be at least another week, perhaps longer. We say, let's hope we have running water for Christmas.


Mutt:  I got some really funny ones today.
Jeff:  I doubt it.
Mutt:  I'll prove it. A bee farm was started by a man who wanted to keep buzzy.
Jeff:  That's not funny.
Mutt:  A Redneck farmer first used a duck as an alarm clock – it woke him up at the quack of dawn.

Jeff:  That's not funny.
Mutt:  A Filipino man was hired by the circus as a contortionist – he was the first Manila folder.
Jeff:  Ditto.
Mutt:  A slab of stone was discovered with a multiplication problem carved on it – it was the first concrete example.
Jeff:  Ditto.
Mutt:  A special pail was invented for electric milking machines because one good urn deserves an udder.
Jeff:  Ok, I got one. A woman invented a glass diaphragm because she wanted a womb with a view.
Mutt:  An artist invented the traverse rod because he wanted to draw drapes.
Jeff:  Huh? At the first Arabian Embassy ball, everyone danced sheik-to-sheik.
Mutt:  Huh? At the first convention of mathematicians, everyone sat around multiplication tables.
Jeff:  At the first flea circus, a dog came by and stole the show.
Mutt:  At the first Kentucky Derby, the announcer told everyone that “Poison Ivy” was scratched.
Jeff:  A&W opened the first drive-in restaurant for people who wanted to curb their appetites.
Mutt:  Those weren't so bad.
Jeff:  Yes they were.
Mutt:  Messina with water.
Jeff:  Now that's a joke.