Annual Quiz Award Ceremony, and the winner is ... 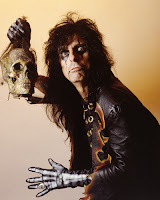 They called us simply, "The Worst." The worst behaved, the worst attitude, the most rebellious kids who would never conform, "The Worst." See Alice Cooper. Ministers sons are sons of guns.

Of course, some are little obedient angels who know how to shake hands with adults after church, who act like they own the place, who at an early age could take over for Dad (or Mom). Junior faith healers and Bible salespersons who could get those dollars out of parishioners' pockets with an innocent smile.

Then we all had to grow up our own imperfect ways, some remained sincerely religious, even became preachers (Martin Luther King, Jr.), some took other roads. Beyond the stereotypes and insults. But it was a weight growing up, a bad reputation, not making adolescence any easier.

The song, "Son of a Preacher Man," popular when I was a teen, didn't help. Nor did the fact that preachers are often moved by their churches, so their kids lose all their friends at a moment's notice. Constantly starting over, like military brats.

Maybe the problem comes from seeing the religion show from behind the curtain (the hypocrisy, judgmentalism, parishioner meanness). The leader followed faithfully by the congregation can be all-too-human back at home. Or living in the so-called glass house, where whatever the children do can damage the parents good name.

Beneath the stereotypes of preacher’s kids as either goody two-shoes or devilish hellions lies a tense and sometimes taxing reality, the children of clergy say. Studies show that many PK’s, as the lingo goes, struggle with issues of identity, privacy and morality. There’s even a support group, Preacher’s Kids International, dedicated to the “celebration and recovery of those who grew up in the parsonage.” (Daniel Burke, Huffington Post)

Mutt:  Hiya, Buddy. Didya hear? My dog gave birth to puppies near the road and was cited for littering.
Jeff:  Let’s talk about rights and lefts. You’re right, so I left.
Mutt:  Oh yeah well, when William joined the army, he disliked the phrase ‘fire at will’.
Jeff:  This means war. The man who survived mustard gas and pepper spray is now a seasoned veteran.
Mutt:  He drove his expensive car into a tree and found out how the Mercedes bends.
Jeff:  A rubber band pistol was confiscated from algebra class because it was a weapon of math disruption.
Mutt:  What do you call a marketplace that sells weird stuff? A bizarre bazaar!
Jeff:  Being struck by lightning is a really shocking experience!
Mutt:  The Hungary Wales Seattled down and Finnished their lunch, Hamburg-ers with Chiles.
Jeff:  My oh my. A bicycle cannot stand on its own because it is two-tired.
Mutt:  “What’s purple and 5000 miles long?” “Ooh! I know! The Grape Wall of China!”
Jeff:  How do celebrities stay cool? They have many fans!
Mutt:  The reason he didn’t become a juggler was… he hadn’t got the balls to do it!
Jeff:  Do you know what the Kung Fu Panda said?
Mutt:  The who? The what?
Jeff:  “Yesterday is history, tomorrow is a mystery, but today is a gift. That is why it is called the present.”
Mutt:  For the love of Mike!
Posted by E. Martin Pedersen at 11:22 AM No comments: