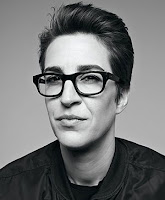 Dear Rachel Maddow,
I love you honey, but ... -- Every day you discover shocking truths about national politics, and I am grateful. You're doing a heroic job of finding the dirt hidden under the Trump rug (along with hundreds of colleagues). -- But ... I can't say I'm shocked. I'm not shocked. Sorry. Of course I want Trump out of office like all thinking people, but, you know, BREAKING NEWS: the Russians got their boy Trump elected ... duh. He's committing serious crimes as president ... duh. Trump's using his power to get richer ... duh. He's a pathalogical liar who's reneged on every campaign promise ... duh. Trump's laundering money for the mob ... duh. He's a disgusting human being ... duh-uh-uh. Really? Who didn't know this stuff? I'm an idiot, and I could have called it a year ago (well, I couldn't have called Trump winning, but that was dirty tricks). In the saddest, most tragic way.

The Republicans in Congress and at the state levels, however, are another story. Denying tens of millions health care. New laws to limit women's reproductive rights. Gerrymandering and voter suppression. Not merely soft on environmental issues but denying scientific fact. Busting undocumented immigrants by splitting families, deporting non-criminals, etc., ad nauseum. Where does this shit come from? The Grand Old Party got infiltrated by the Tea Party that got taken over by the Freedom Caucus, the Koch brothers, the KKK and whatever's worse. What happened to Conservatism, Capitalism, Patriotism? They've been replaced by the dark fringe of the anti-Semitic America-Firsters, rape-apologists, Confederate slavery nostalgia-ists, let refugees diers, abortion=murder-ers and flat-earthers.

The GOP was always the party of money, but now the price tags are showing on the politicians themselves. "Hey, Congressman, what's your opinion?" "Wait a sec, let me ask my master." The phrase "putting party before country" (or vice versa) loses meaning when the androids answer only to banks, insurance companies, drug companies, arms merchants, and on and on. Ryan and McConnell are names, however, that will live in infamy.

As does Nixon: I'm still pissed off at Nixon. Watch out everyone, the emotional legacy of presidential betrayal lasts for decades. To us back then Nixon was Viet Nam, he was Kent State, the phony oil shortage, Tricky Dick, I am not a crook, the Agnew scandal, Pentagon Papers, kissing up to China, he was the liar, the disgrace, the evil manipulator. (Even when he wasn't.)

And Watergate. Enemies List, Saturday Night Massacre, 18 minute silence. I remember it all and the feeling of insecurity it gave me that the whole system was failing, terrible things were happening. And the feeling of relief when it was over (and disgust at the pardon). I spent the summer of 1974 glued to the TV showing the watergate hearings every morning (in California). One by one the dozens of victims of Nixon's arrogance paraded onto the floor, took the oath and sat to testify. These guys (Haldeman, Ehrlichman, Mitchell, Colson, Dean, etc.) thought they ran the universe and now they were going down hard. Most, in fact, did time (for perjury, conspiracy, obstruction of justice). Republican Howard Baker and Democrat Sam Ervin asked the questions and got the answers. Watergate is fascinating history, but living it was constant tension. Like in a war or natural disaster, a death in the family. Then it was over. We got Chevy Chase playing Gerald Ford. Flowers bloomed again.

I guess what I'm saying is, yeah, we'll get rid of Trump and re-claim our country. We'll survive the Pence years and elect a more humane president to compensate. But the damage that this band of marauders has done will not be easily undone. Fifty years from now the teens of today will still feel the hurt of the Trump-scepade.

Mutt:  Do you have to be employed first to be unemployed?
Jeff:  I don't have a solution but I admire the problem.
Mutt:  I recently read a new book on cloning: “Duet Yourself.”
Jeff:  I read a new magazine for beginning gardeners: “Trowel and Error.”
Mutt:  People who bought the first books on lawn care became good weeders.
Jeff:  It's like we're pretending we can actually read.
Mutt:  That'd be a waste. Except the racing forms.

Jeff:  Oowah! Result of the first silkworm race: they ended up in a tie.
Mutt:  An invisible man marries an invisible woman. The kids were nothing to look at either.
Jeff:  I went to a seafood disco last week and pulled a mussel.
Mutt:  Last, but at least it's last: What do you call a fish with no eyes?
Jeff:  A fsh.  And deja moo, what's that?
Mutt:  You got me.
Jeff:  The feeling that you've heard this bull before.
Posted by E. Martin Pedersen at 7:07 PM No comments: