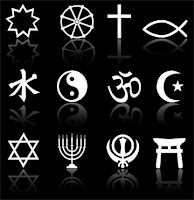 The problem—our need to believe while remaining open to better beliefs and what lies beyond belief altogether—must be resolved existentially, through living it … (Huston Smith)

Breaking News: Jesus made the San Francisco Giants win the National League pennant! (point index fingers upwards) The Lord was with us, against Philadelphia (what sins were they paying for, I wonder), so we tore them to pieces, a Holy baseball massacre. Thank you, God Sir. [Don’t you wish he’d help us win that other game over in Afghanistan? Or are the enemies praying harder to their God?] = example of sarcasm

Did you take the religious knowledge quiz? (http://features.pewforum.org/quiz/us-religious-knowledge/?) I got ‘em all (brag, brag).

Remember when President Obama, in his inaugural address, said: “We are a nation of Christians and Muslims, Jews and Hindus, and non-believers.” He raised his finger for emphasis on the last note, as if to say that the atheists and agnostics and don’t-give-a-damners can finally join the nation. (My religious family and religious friends are rejoicing for me, right?)

In fact, I was taught that separation of church and state is fundamental to good government and that freedom and respect for all religions is the cornerstone of democracy. And that belief is a private matter.

Here’s the test: You live in a country where almost everyone practices a different religion from yours (or your none-of-the-above), how do you want that society to respect you? By singing God Bless America at the ballpark? In God We Trust on the money? Forcing you to pledge ‘One nation under God’? Whose God? Our God, not yours. And if you ain’t got one, you ain’t nobody ‘round these here parts.

Going to hell? Been there, done that? Sounds kinda fun, huh, with all the nasty sinners? Dynamiting bridges, taking psychedelic drugs, consorting with biker chicks in leather chaps. Yahoo! Hell is having no self-control? Yeah, whatever. Is there a separate hell for each religion, since the other religions always believe they’re right and you’re damn well going downwards? Sure hope they don’t send me to Buddhist hell by mistake! Boooring.

Sorry, it’s too easy to expose religion to ridicule. The Shroud of Turin, proven to be a fake in 1988 (as the cloth covering Jesus’ corpse (didn’t he rise from the dead?—never mind)), continued to draw millions of faithful viewers at its recent exhibit. And they knew; they’d heard of the carbon dating that showed it was from around 1300 AD. The need for spirituality, strong as the attraction of opium, overcomes reason again.

Can religion survive the sins of the church? (a hint: Jerusalem, the thrice holy city, 4000 years of strife, still there) I mean, when is enough enough or way way too much? When are there so many scandals, so much evil, so much perversion, that one should abandon an organization like a rotten marriage? Never? Till death, murder, rape or terror do you part? How many people must lose their life savings to con artists? How much common sense murdered by credence in aliens, phantoms and superheroes dressed up as religion? How many boys/girls need to be molested, abused, violated, ruined (use the stronger term here if you dare)? There’s an epidemic of pedophilia worldwide (the abused becoming abusers exponentially) that originates partly from the clerisy, often ‘celibate’ Roman Catholic priests. Is anyone proposing a radical cure? Is the church? The pope has waffled so badly recently that his credibility is kaput.

And the anti-gay protestant preacher who pays male whores to bugger him and then, after his habit becomes public, leaves his mega-church to go start another mega-church? (Ted Haggard, for one) And the sheep who follow their pastor? (I used to get the bus in San Francisco across the street from the People’s Temple when 918 of the automatons drank poison.) Sometimes religious people act like they’re insane, idiotic, gullible fools, daft, bonkers, loony tunes, psycho, wacko, batty, deranged, unhinged, stark raving crazy crackers mad.

Ahh faith, they say, faith (immune to critique), mysticism, ecstasy, the unknowable, the mystery. The big lie, others respond. Big Brother’s double-crossing doublespeak. And like fish they all took de-bate.

All I know: When a religious experience is legitimate it deserves respect in the same measure as we must show disdain and intolerance for cheaters, frauds, hot-air blowers, brain-washers, hustlers, swindlers, buffoons, liars, hypocrites, suckers, dupes, demagogues, charlatans, scam artists, phonies, fakes, manipulators, deceivers, rabble rousers, propagandizers, browbeaters, sound-biters, wheeler dealers, exploiters, abusers, sexual predators, and on and on and on and on.


Mutt: Old ministers never die, they just get put out to pastor.
Jeff: I beg of you ... please.
Mutt: Okay, Jeff. But you know, I once considered going into the ministry myself.
Jeff: Really?
Mutt: Yes, but I didn't have an altar ego.
Jeff: Awright, guess what’s the religion of the woman who had a sex-change operation. No don’t, I’ll tell you: a hethen. Get it, he-then?
Mutt: For the love of Mike. I had a friend, very religious, who owned a pest control company. Every morning when he sent his workers off on their assignments he said, “Brothers and sisters, let us spray.”
Jeff: These religious jokes are way too pat. Let’s knock it off.
Mutt: One more. Here’s an old-timer. Ready?
Jeff: No.
Mutt: Outside a small Macedonian village a lone Catholic nun keeps a quiet watch over a silent convent. She is the last caretaker of this site of significant historical developments, spanning more than 2,000 years. When Sister Maria Cyrilla of the Order of the Perpetual Watch dies, the convent of St. Elias will be closed by the Eastern Orthodox Patriarch of Macedonia.

However, that isn't likely to happen soon, as Sister Maria, 53, enjoys excellent health. By her own estimate, she walks 10 miles daily about the grounds of the convent, which once served as a base for the army of Attila the Hun. In more ancient times, a Greek temple to Eros, the god of love, occupied the hilltop site.

Historians say that Attila took over the old temple in 439 A.D., and used it as a base for his marauding army. The Huns are believed to have first collected and then destroyed a large gathering of Greek legal writs at the site. It is believed that Attila wanted to study the Greek legal system and had the writs and other documents brought to the temple. Scholars differ on why he had the valuable documents destroyed - either because he was barely literate and couldn't read them, or because they provided evidence of a democratic government that did not square with his own notion of "rule by an all-powerful tyrant".

When the Greek church took over the site in the 15th century and the convent was built, church leaders ordered the pagan statue of Eros destroyed, so another ancient Greek treasure was lost. Today, there is only the lone sister, watching over the old Hun base. When she goes, that will be it.
Jeff: And?
Mutt: That's how it ends, with No Huns, No Writs, No Eros, and Nun on base.
Jeff: Lord have mercy.
Mutt: Did the Giants really win the pennant?
Jeff: You betcha brudda! Youuuuu betcha!
Posted by E. Martin Pedersen at 8:14 AM

I’ve recently started a blog, the information you provide on this site has helped me tremendously. Thank you for all of your time & work.