I was saddened to learn of the recent deaths of two of my heroes: Mike Seeger and Sam Hinton. Both taught me a lot, although our in-person contact was brief. 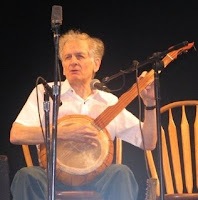 I only talked with Mike Seeger once backstage at one of his concerts in Berkeley in the 80’s. He impressed me with his generosity and kindness. In a soft voice, with a Virginia hills accent, he asked about what I did and where I lived and so on. He seemed interested to know that an American musician was singing in Sicilian schools and playing old-time music on the local radio. “Sicily? Well, how about that.”

Maybe it’s silly, but I imagined we had made a tiny connection; my name and face would remain in his subconscious files, or, at least, he would represent my desire to learn from a master (I have collected all his classic records, including The New Lost City Ramblers set).

Mike Seeger was a sort of holy man of old-time music. When I saw him last in Berkeley a couple of years ago, I got to the Freight and Salvage early and sat near the front. Before the lights went down I turned around and saw many of my idols, the greatest traditional musicians from Northern California, all sitting at the guru’s feet (the row behind me, for example, was taken by the Cheap Suit Serenaders). Some of them later joined him on stage (Evo Bluestein, Maria Muldaur, Larry Hanks, Laurie Lewis, Eric and Suzy Thompson, David Grisman).

Mike Seeger was an excellent scholar, in the tradition of his father, his head full of details, but he was also a very funny and personable man. He could respect the driest mountain tradition and still put on a warm, wonderful show. And he got his gourd banjo from Bob Thornburg as did I, another connection.

Unless you were tragically immature, brainwashed or on drugs (tv, video games, commercial music, etc.), you had to like Mike Seeger, who showed us all how to respect and love our musical roots. 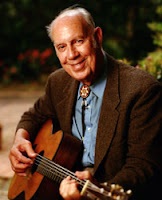 Sam Hinton was a mentor to me. I took a graduate summer course from him on using folksongs in education, the topic of my Master’s Degree, and he was the best example of what I was most interested in doing with my life at the time. I wanted to be Sam when I grew up. He looked and acted very much like my beloved grandfather.

Since I was the only student in the class who knew folk music well, we had a series of private conversations that I still remember vividly. He showed sincere interest in what I was doing. I gave him a copy of my Master’s thesis, a large collection of song texts and notes (now over 950 pages), and he replicated by digging out of his pick-up truck all of his cassette tapes, tapes I still cherish.

Sam Hinton’s name is not a household word, even in folk music anymore, because, though he was a pioneer, he didn’t promote himself. He promoted the music and the culture it belonged to. He was humble enough, for example, to volunteer to do the beautiful calligraphy for the fine Rise Up Singing songbook. It was the project that counted not the ego.

Sam was as warm as his voice; he was a gentleman, a gentle man, a big fellow with a big smile and big hands. You couldn’t imagine him being mean or violent. He had a childlike twinkle in his eye that told you he had another good song up his sleeve. He played his 1900 Washburn guitar, his diatonic harmonica, and his many other instruments perfectly and remembered the words to even the longest ballads. That was his scientist’s mind and precision showing through (and natural talent).

We children growing up in the sixties heard Sam’s early records at school back when a couple hours a week were dedicated to singing (along with Burl Ives, Alan Mills, Pete Seeger and others). In my fifth grade class we started every morning singing “This Land is Your Land,” instead of reciting the Pledge of Allegiance. Miss Soite was making a statement, but we just liked the music.

Getting to know Sam Hinton was the high point of my interest in folk music, having lunch together several times (I had a bag lunch; he ate beans and peaches out of the can), talking a couple hours after the last session out in the parking lot. Now he was an old man, who, I believe, died peacefully as he lived, so I don’t feel loss so much as gratitude and privilege to have known such a sweet, quiet giant.


Both men have websites, and many of their recordings are still available.
Posted by E. Martin Pedersen at 4:31 PM

What a great article on Mike Seeger and Sam Hinton. You have a lot of great stories! I didn't know about your educational background in folk music. You mentioned the great names in folk music, and Laurie Lewis is one of my favorites. She was a classmate at Berkeley High and we were in the Berkeley Symphony.