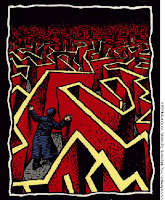 A second chance—that’s the delusion. There never was to be but one. We work in the dark—we do what we can—we give what we have. Our doubt is our passion and our passion is our task. The rest is the madness of art. (Henry James)

Come here. I’ll let you glimpse in the window at my mid-lifeness, for Mr. Jim Houston told me, quoting William Morris: “Writing is finding out what I didn’t know about what I knew.” Apply liberally to self. Because I don’t know what’s wrong with me or why, but I do find myself asking myself, “what do you want,” several times a day. Though sometimes the question is: WHAT DO YOU WANT!!!

The severe thing is that I have no consistent answer. The severer thing is that the answer may be that I already have what I really want. It’s become a path to a pathological question, one that everyone I know can eagerly debate to infinity, except those who’ve brainwashed themselves, or are anesthetized, or sold-souls, or are so busy they don’t ask, don’t tell.

There’s a new lottery in Italy that pays a good monthly wage (about triple mine) for life. No millions raining from heaven, but the common sense of paying bills and having a little left for a summer trip or a new bicycle. This is a country in which the wages are so low, they call it the fourth week problem. You can eat pasta and fagioli and keep the lights on for three weeks, then the cash runs out. Most bank accounts contain hundreds of euros, alternating red - black. Squeak.

So do I want dirty money? Financial security, 10-weeks salary a month, the relaxation response? My buddy Mike has always accused me (correctly) of searching for the leisure life, riding the gravy train, taking it E.Z. Would that reduce the tension? But, wait a sec, the poor people I’ve met around the world are often the happier. Couldn’t I just trust that the cash flow will keep flowing like the water cycle and peace out?

So is it spiritual bliss I want? Hell yeah. Only I’m not on any spiritual track so finding something I’m not looking for is gonna be extra hard. I think enlightenment takes more work than luck. Plus I lost my faith about forty years ago. Other than that …

Or do I confuse bliss and peace with tranquilizers and neck massages? Maybe I just want the stress to go down a notch or two, not all the way to zero like a flat line. That sound dangerous, huh? Plus I’ve become a coffee drinker in my old age. Awakeness please.

So I want movement, excitement, rock and roll, shit happenin’, hoppin’ and boppin’? Yeah, I guess, whatever. A rise in my Levis? Hey, let’s not get into that. A hot actress? A wonder woman? My buddy George once said to me, “it’s not that big of a deal.” Extreme wisdom in seven short words. Not worth chasing the bunny’s tail round the track every day.

And while it’s been scientifically proven that men think about sex 99% of the time, I believe that to be high by several points. As Dr. Jane Goodall said, more or less, “Yes, chimps have wars, but that doesn’t mean humans have to have wars. We have the instinct, but we also have self-control.” And self-denial, I add, and self-pity and self-centeredness and self-loathing.

So where’s the power? What big big dream is left? I want … um … I want the Nobel Prize for originality, the Olympic Gold for being me. Will I be a great school teacher? (1970’s) A folk singer? (1980’s) A scholar? (1990’s) A novelist? (2000’s) I can have all these lives in one, but then I can’t have one in one. And I may have passed the expiration date for each career. I am now older, for example, than every player on my baseball team, every player in all of baseball AND the Giants manager (ancient Bruce Bochy’s 4 months younger than I). So though I may train and dream, it is unlikely I’ll make the team. Another job I’ve cut myself out of.

Is it ‘work sucks’ versus ‘find a job you love and never work another day’? To paraphrase Confucius (read ‘confusions’). A promotion, a career, a position of prestige, recognition of professional excellence? Well, in this funny country prestige is bought and sold; professional excellence is punished; a career is a sick joke. So maybe the Sicilians are right: work less is best. Get out of anything you can, the smartest avoid the strenuous. But you can’t get out of one thing.

If you alone feel a sense of duty, pride in a job well done, a foreign sense of the just-ness of credit earned and given, then you can’t “do as the Romans do.” You gotta be yourself (to be true) simply because you can’t be/do any other way/one. There’s the wild dog metaphor again. In Italian work jargon a “wild dog” is someone who doesn’t play by the rules, someone out of control and, therefore, dangerous. Grrr.

What’s left (he asks in his questioning, questionable anti-sermon)? Dunno. I’m spinning around the Merry-Go-Round without getting anywhere, and the colored lights, the painted horseys, the flashing mirrors, and the tinkling music I liked so much when I was young are giving me the creeps, about to make me puke. I’ve auto-diagnosed some pre-freak-out form of epilepsy. It was fun while it was fun, then it became the Twilight Zone. Dudududu dudududu.

I think more than one person has concluded that we girls just wanna have fun. Then the question becomes, “What do you like?” But I’m a Norski, so the answer is elusive, and the question's unintelligible. We’re worker bees, not lazy street dogs rolling on their backs moaning for a scratch with their legs spread apart. We’re Scandinavian protestants on a mission, not He-Done-ists. Back to the grindstone, boy, like it or not. And a sugar cookie on Christmas. Back to rolling the grindstone up the muddy hill, that is. Sissy.

If I were alone in this feeling of taking myself hostage—mime in a phonebooth—I’d call myself crazy and shut up, but recent conversations with friends my age tell me it’s a crowded boat with no rudder, oars or sail (and no boat). We’re all seasick with no land in sight. Let’s play Charades! I know, let’s sing BINGO!

Hyla Bolsta put it best in her essay (scroll down a couple months). And re-read Ken Kesey’s spiel on the Mystery (also below).

Well, I’d like to blabber on some more, but I gotta get back to work. As Surmelian said: "... writing out of his own bleeding wounds; knowing he is probably the most absurd of men ..."


Mutt: So tell me a story and make it good.
Jeff: A woman has twins and gives them up for adoption. One of them goes to a family in Egypt and is named Amal. The other, who goes to a family in Spain; is named Juan. Years later, Juan sends a picture of himself to his natural mom. Upon receiving it, she tells her husband that she wishes that she also had a picture of Amal. Her husband responds, “If you’ve seen Juan, you’ve seen Amal.”
Mutt: I don’t get it.
Jeff: Tough.
Mutt: Here’s mine, watch out. There were two skunks—Out and In. When In was out, Out was in. One day Out was in, and In was out. Their mother, who was in with Out, wanted In in. “Bring In in,” she said to Out. So Out went out and brought In in. “How did you find him so fast?” the mother asked. “Instinct,” he replied.
Jeff: P.U.
Posted by E. Martin Pedersen at 7:49 AM

What is the difference between 'severer' (more severe), and 'severer'(the guy who cuts off heads)?
Methinks he may need to sever the looming head of angst.
The poor you always have with you, but you don't have to be poor.
Even if they are happier. A traumatic brain injury could get you the same thing.

And a severer can take care of that T.B.I. Whack.

Methinks, it's all the thinking.

So what's the opposite? Music, for one, when you are so into it you're out of it. Some other stuff.

Remember what Jim Houston said as he was working on his next novel, just before he died: Write now, worry later.