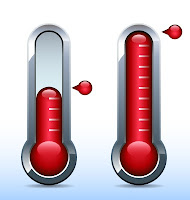 After a particularly brutal exam session, in which a large percentage of students failed, Neal thought he could justify/explain his correcting/judging work at the first lesson of the new semester.
He studied the problem in his mind for many days. The lightbulb finally went on: Eureka. Heat. We examiners are like weather-persons telling the viewers what the situation is according to our information. Passing along data. We don’t intervene or influence the weather, we just report it. Storms ain't our fault.
Your level of English knowledge and skill, above or below the sufficiency for the level of exam you took? If you took a lower level exam it might be above, but now it is below the more advanced level. It works. The temperature metaphor.
All this is a reaction to the classic, “you failed me/I passed” syndrome. The students blame us for their own deficiencies. Natural enough, but if a learner must take responsibility for her/his own learning, the blame game must be overcome.
So Neal was preaching this little sermon at the opening of the new lessons, and turned his back to draw an illustration on the board. “Your marks on exams, written and oral, are like the temperature on a thermometer...”
“Look. Here’s a thermometer. I’m no artist, as you can tell. Here’s a thermometer with the mercury in the bulb at the bottom, and here are the temperature markings. Here’s freezing: 32 degrees Fahrenheit or 0 degrees Celsius.”
Neal thought it was going pretty well. There was twittering in the background. Probably the students were impressed by his knowledge of science.
“Now if the temperature (or your exam mark) is here, it’s freezing. Insufficient. If it’s here, it’s cold but acceptable. What you need to try to do is continually improve. If you’re here today, you could be here tomorrow (or next year rather). It’s only a question of hard work. Give it your all and the temperature will rise.”
Neal heard smirking noises of presumed agreement as he drew the mercury rising in the tall thermometer up the blackboard. He chalked in the ascent up to the top—boiling point. Hot hot hot! A+++
Then the room broke out in hilarity and roared with free laughter. Neal thought that what he was saying was not that funny, that the disappointed F-students should be a little more serious. Something told him that they were laughing at him, but he couldn’t fathom why.
Neal turned to the crowd, now that he had become their favorite comedian. He turned back to the board. What was it? His fly was not open (he checked). Was his thermometer metaphor really so clever?
“Oh my God, I’ve drawn a giant boner!” Neal exclaimed. And brought down the house.
Happy trials, Martin
Mutt: A white lie is aversion of the truth.
Jeff: What inspired that thought?
Mutt: What thought?
Jeff: What happened when the cow tried to jump over a barbed wire fence?
Mutt: Uhhhh ...
Jeff: Udder destruction.
Mutt: When I was in the supermarket I saw a man and a woman wrapped in a barcode. I asked, "Are you two an item?"
Jeff: What do you call a fish with no eyes?
Mutt: Uhhhh ...
Jeff: A fsh.
Mutt: I fired my masseuse today. She just rubbed me the wrong way.
Jeff: I tried working in a bakery, but was told I wasn't "bread" for it.
Mutt: What did the toy store sign say?
Jeff: Uhhhh ...
Mutt: Don't feed the animals. They are already stuffed.
Jeff: A horse walks into a bar. The bartender says, "So, why the long face?"
Mutt: What do you call a baby monkey? A chimp off the old block.
Jeff: Was there a year-end sale on second-hand jokes?
Mutt: Uhhhh ...
Posted by E. Martin Pedersen at 7:59 AM

I’ve recently started a blog, the information you provide on this site has helped me tremendously. Thank you for all of your time & work.