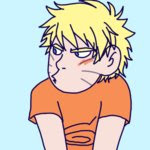 Neal went to the eye-doctor, the oculist or optometrist, for an exam so he could get some new reading glasses. No big deal. Except that we’re talking about Neal.
When the receptionist-nurse lets you in, you sit in a square waiting room with too-low, too-soft sofa benches in black vinyl and wait your turn to have the various stages of your exam. She has a nice smile, but the magazines are trashy and the pictures on the wall are flat out ugly. There’s a door on the right into the restroom. The restroom is really a converted broom closet, and the door is flimsy with a sort of screen thing near the bottom.
Neal waited a long time. The nurse invited him in to get his eye pressure checked on a machine. She was cute and Neal had unclean thoughts. In addition, he could not keep his chin on the chinrest and keep his eye open while the machine blew air into it, so the exam had to be repeated twice. He returned to the waiting room with a grin while the nurse shook her head.
Then she put eye drops into his eyes to dilate the pupils. She wasted a drop or two when Neal unintentionally shut his eye. He wasn’t really used to this sort of thing. Then the really long wait started.
Neal couldn’t read and the light sort of hurt, so he tried to find something to think about, like a mental game or a story to keep him occupied. But he found nothing and just fidgeted for half an hour. Often he blew out air like he was exasperated. Like ‘I can’t stand this much longer.’ Nobody in the waiting room would talk to him.
Then Neal needed to take a leak bad. He had a little trouble with the door knob, but got inside okay. Ah, alone at last! At the bottom of the door there is a grate because there is no window in the restroom, just a ventilator fan which was broken. This situation was not entirely clear to Neal. What was clear was that he had to take a leak really bad and he was in a restroom.
The grate in the door and the lack of a noisy ventilator meant that the ten or so people in the waiting room five feet away could hear everything just as plainly as if they had been in the restroom with Neal. He unzipped; they snickered. He groaned as he readied for action; they looked at one another with smirks. He let loose; they chuckled like little kids in church. It wasn’t that funny, but the laughter was contagious and unstoppable.
The men, women, teens and children in the waiting room were all out of control. Neal heard the noise but had no idea that he was putting on a show from behind the door. Then the audience tried to contain itself so that he might be less embarrassed when he came out but the laughter came in ripples. It’s always hard to stop when the crowd’s tittering.
Neal finished his leak by blowing some nice long high-pitched wind, and the waiting room exploded. By this time the nurse and even the eye doctor had come out to see what was so funny. People were drying their eyes and containing themselves while Neal washed his hands, and then he emerged. As soon as they saw him they broke up again. Even the eye doctor laughed in squeaky hysterics.
But the worst was yet to come. Neal smiled at everyone and yearned to join in the fun. “What’s so funny?” he said. Everyone laughed even harder. And then a teenage girl saw that Neal had trailed a foot-long piece of toilet paper stuck to his boot. She pointed and the people started falling off their chairs holding their sides. Neal saw that they were laughing now at his toilet paper train, so he pulled it off and held it up. He laughed too. Nobody could stop. They had to wait an extra hour for everyone’s eyes to normalize in order to continue the examinations. Some had to go home and come back another day. One older woman said she laughed so hard she almost wet herself, but she would not use that sound-amplifying toilet if it was the last one on earth.
Neal, once again, had provided a valuable public service.
Happy trials, Martin
Mutt: Very early one morning, two birds were sitting at the side of a large puddle of oil. They saw a worm on the other side.
Jeff: I’m not feeling too good myself.
Mutt: So one flies over and the other one swims through. The question is: which one gets to the worm first?
Jeff: Oh, that would be … the one who swam, of course, because "da oily boid gets da woim."
Mutt: Okay, but did you hear about the woman driving her car slowly and knitting at the same time?
Jeff: Ugh.
Mutt: A man came up from behind and he wanted to pass her. He opened the window and yelled, "Pull over! Pull over!"
Jeff: Ugh.
Mutt: The lady yelled back, "No, it's a sweater!"
Jeff: My turn. One day a man went to see Mozart's tomb. When he got there, the tomb was open and Mozart was sitting there tearing up pieces of paper. The man asked: "What are you doing with all of your great works of music?"
Mutt: And …?
Jeff: You can’t guess?
Mutt: Um, no.
Jeff: Mozart replied, "I'm decomposing!"
Mutt: Ha ha ha ha … I don’t get it.
Posted by E. Martin Pedersen at 8:27 AM