Everybody knows, nobody knows - What is Gangnam Style? 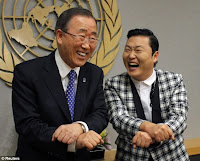 Everyone on Earth (except you?) is crazy about a song-dance-video that no one (except Koreans) can understand. Maybe that’s what we want: stun me, numb me, infect me with viral, yank me around like a kite, just don’t make me think. Only Psy is not co-operating. Gangnam Style is a wonderfully intelligent cultural phenomenon.


The Gangnam district of Seoul is where the rich folks live. ‘Up on the hill where they do the boogie,’ as John Hartford called it. Where the Beverly Hillbillies moved to. Where they have private security and exclusive schools. The Elite. The Upper Crust. The 1%. Wait, this is a song about the Occupy Movement dichotomy of the 1 versus the 99%??? Wasn't that Romney's subliminal message: 99 vote for 1 and you could get rich too? Didn't work though. Well, not for everyone.


Psy said, "People who are actually from Gangnam never proclaim that they are—it's only the posers and wannabes that put on these airs and say that they are "Gangnam Style"—so this song is actually poking fun at those kinds of people who are trying so hard to be something that they're not."


Start with  an Uncool Psy-cho Wannabe lounging on a rich-man’s dream beach in the tropics, except that it’s a sandy playground in the projects with little kids ruining the effect. Then the horse-riding scene, but Psy’s not really on a horse, just pretending badly. Then, with two bunnies on his arms, he walks toward us like a playboy, but he’s in a trash storm (in a dump?) then a snow-storm (is everything fake?). Then the ambivalent sauna scene; are those Korean gangsters he's buddies with? Then Psy dances his superiority among chess players, tennis players and a tour bus of senior citizens. The thinking chess players blow up (bad Hollywood). Then he's dancing on a motor boat (probably rented by the hour), and then Psy shuffles into the yoga class, mooning over a girl’s moon (mocking adolescent sexual attitudes).


Next Psy meets a celebrity in a yellow suit driving a Mercedes, and they dance a duel in the parking garage. Then, in the elevator, Psy is in a compromising position between the legs of a pelvis-thrusting guy (also a Korean celebrity). Then Psy sees a pretty girl on a subway (pole-dancing), drops his jaw, and loses it. That’s what we’ve reduced love to--sleepwalking. Then the spa pool coming up for air scene. Then the nightclub where the hip people go (if they can get in). Then master rapper Psy gives us the straight dope, how Big Brother (Oppan) really is Gangnam Style, but, oops, he’s sitting on the toilet (like everyone else, except the rich and famous). Then more horse-dancing. All the world wishing they had their own stables and expensive cars and loud clothes and sex with gorgeous people and powerful friends. People who ride other people or, more often, are ridden.


The Psy of the video is a fool. The Psy (Park Jae-sang) who invented him apparently not. Social satire is serious. The horse-dance is silly. It has been performed in public squares by thousands of flash mobs around the world. In Palermo there were 9,000, in Rome 15,000. Psy, who doesn’t look like a dancer, has outdanced just about everyone famous, including my brother’s friend from Tracy, MC Hammer. Who’s the wannabe now? President Obama says he's learned the moves. Dozens of parodies and more to come. What fun.
In the real Gangnam, there's a problem because the affluent people have gotten deeply into debt and are about to lose their shirts and lifestyle. Because the song's serious message is buried under the yuckadoo, some have even called it subversive. For example, the lyrics refer to girls who eat cheap soybean paste in private so that they can afford to drink Starbucks mocha frappe lattes in public. For example, the lyrics are mostly about lusty longing for a 'classy' girl who can behave like a proper prude by day and turn into a sex kitten at night, because the man, like all rappers (all men?), is a sex machine in his mind. Lyrics please.

A girl who is warm and natural during the day
A classy girl who knows how to enjoy the freedom of a coffee
A girl whose heart gets hotter when night comes
A girl who makes that kind of change.

I’m a guy
A guy who is as warm as you during the day
A guy who gulps his coffee before it even cools down
A guy whose heart bursts when night comes
That kind of guy.

A girl who looks quiet but plays when she plays
A girl who lets her hair down when the right time comes
A girl who covers herself but is more sexy than a girl who bares it all
A sensible girl like that.

I’m a guy
A guy who seems calm but plays when he plays
A guy who goes completely crazy when the right time comes
A guy who has bulging ideas rather than muscles
That kind of guy.


Who Let The Dogs Out meets La Macarena. The Secretary General of the U.N., Ban Ki-moon, who does understand the lyrics and K-pop or hallyu, called the song, ‘a force for world peace’. Right on! Psy said he did it to: "make people laugh like crazy even in the midst of all this global economic slowdown."
So, besides not being able to get the song out of my head, I’m grateful that an enjoyable, wacky, joyous social critique, making a mockery of the phony values that modern society is based on: be beautiful-get lucky, get rich-buy toys, screw your neighbor before he screws you, and so on, has toppled and replaced that teenage fluff by Justin Bieber, appropriately named “Baby,” as the Number One Song on the Internet of All of Human History. Almost 1/8th of the world—men, women and children—are dancing Gangnam Style and more every day! Yes, dance, sing, laugh and be merry. We need it.

Mutt: I say, I say, WHAT?
Jeff: Something bothering you?
Mutt: Did you read what the boss put up? He’s gone bonkers. Stooping so low into the slums of popular culture!
Jeff: Yeah, we’re way too sophisticated for that stuff.
Mutt: Wanna do the dance?
Jeff: Oowah, yes.
Mutt: First, listen up. A wealthy man decided it would be fun to have himself cloned. The clone turned out to be an exact duplicate of the man except that it spoke nothing but extremely profane language. After several months of listening to this, the man got fed up, took the clone up into the mountains and went to the edge of a steep cliff. Looking around and not seeing anybody, he pushed the clone over the cliff. Just then, a cop stepped out from behind some bushes and said, "I'm going to have to write you a ticket." "What for?" "For making an obscene clone fall."
Jeff: I love it when the rich get their due.
Mutt: Here’s yours. A German farmer with relatives in America sent them a package consisting of some pork sausages made from his old pig. When they complained that the package had not yet arrived, he wrote: "Cheer up. The wurst is yet to come."
Jeff: Three strikes and you’re out.
Mutt: During the Korean War, Syngman Rhee's son went to work for Henry Luce. But as the North Koreans came pounding down the track past Seoul, the young man got lost in all the confusion. Well, every correspondent in the Time-Life empire was sent out looking for him. After many hours of searching, one of them found him. "Ah!" he exclaimed, "sweet Mr. Rhee of Life, at last I've found you!"
Jeff: Oppan Gangnam Style!
Mutt: Hey, Sexy Lady!
Posted by E. Martin Pedersen at 12:52 PM