No, You're a Puppet! 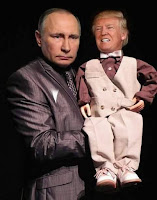 Trump seems out of control (no, you're out of control!). Either he is or is not. If he is not, maybe it's all an act. In any case, the question these days seems to be: who is in control? When the president speaks that's usually policy, but infant Trump contradicts his staff and department heads (and reality) every day, says whatever, makes shit up. Then cooler heads prevail telling the media that what Trump said is not what he meant, often just the opposite. What gives?

Is most unlikely president, Donald J. Trump, a useful fool, somebody's stooge, a straw man? Doing who's bidding? Is Trump a Russian puppet as Hillary said? Sure looks like it. His sending kisses to Putin sure is weird. Or is he a life-size cardboard dummie for the Republican reactionary agenda (racist sexist xenophobic)? Or is Trump a White Nationalist puppet? Or a Wall Street puppet? Can we get an answer by looking at who he's favoring with his executive orders? It's not us. Is he a puppet of the radical Christian right? Or, more likely, is it the millionaire Super PACs that put words in his mouth? He doesn't seem to be having a problem reading the note cards they give him and sign the presidential binder in front of the cameras. His apparent problems come when he's cut loose. Then he seems like a coke-head. So whose puppet is he, who's the president's boss? Not the American people this time around, that's pretty sure.

Orrrrrr. Could it be that Trump is totally in control and playing us all for fools? Look at the Mike Flynn affair: he puts this joker in a key position, the scandal comes out about his plotting with the Rooskies, Flynn gets the axe, Trump sings him a love song, happy ending, simply a bad choice, do-overs. Then he picks this McMaster guy, and everybody left right and center falls over themselves to praise him as Mister Perfect. I feel like I just fell for the bait and switch, the three card monte, the oldest trick in the book. All that over the top show business wild man act could be a distraction tactic while the confederate picks your pocket. It seems fishy to me to write off Trump as the fool and puppet that he seems. What if it's all a set-up and we're the suckers?

Trump could merely be a terrible president and a stupid person (he can't spell, can barely talk, doesn't listen, paranoid delusional, an easy mark for comedy, etc.), or he might be the world's best con man, scamming the whole country pretending to let someone else pull his strings. Either way we need to watch out, be smart, keep up the resistance, look under the surface, and never let him get away with anything. And keep your hand on your wallet. The one that holds: human rights, the rule of law, the constitution, American integrity and diversity, and so on.

The world's laughing now, but I say: Watch out for this guy; he wants us to underestimate him.


Mutt:  Whoever invented knock-knock jokes should get a no-bell prize.
Jeff:  Really? That's the best you can do?
Mutt:  Slow day. I did write a theatrical piece about puns.
Jeff:  Don't tell me, don't tell me. It was a play on words.
Mutt:  A man noted for telling puns was locked into a dark closet and told that he would not be released until he made up a pun about his situation. He immediately shouted, "Oh, pun the door!"
Jeff:  That's better. You know I heard that there was a ghost in a hotel.
Mutt:  So?
Jeff:  So the management called for an inn spectre.
Mutt:  The truth may ring out like a bell, but it is seldom ever tolled.
Jeff:  How true. Did you hear about the invisible man who married an invisible woman? The kids were nothing to look at either.
Mutt:  Did you hear about the bear that was hit by a truck and splattered all over the road? They said it was a grizzly accident.
Jeff:  Speaking of Secretary DeVos ... What did the Norwegian coach say to his losing team of snakes?
Mutt:  We're doing Norwegian jokes? Isn't that racist?
Jeff:  He said, "You can't venom all."
Mutt:  Okay, this kid--I don't know if he was Norwegian--was bagging groceries at a supermarket. One day the store installed a machine for squeezing fresh orange juice. Intrigued, the young man asked if he could be allowed to work the machine, but, alas, his request was denied. The store manager said, "Sorry kid, but baggers can't be juicers."
Jeff:  Alas.
Mutt:  I don't know. Alaska.