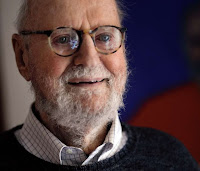 Today's the 100th birthday of Lawrence Ferlinghetti. His new book, Little Boy, comes out today. There will be celebrations in San Francisco, where Ferlinghetti is an icon. He still lives in North Beach (the Italian neighborhood). I wish I was there to wish him well.

Ferlinghetti is my favorite living writer and poet. He was the elder brother (and publisher) of the beat poets: Ginsberg, Kerouac, Corso, McClure, di Prima, and so on. In my mind, he stands with Gary Snyder, who is also still kicking, as two different voices from about the same place buzzing in my ear. I used to hear them read when I lived in San Francisco, before Italy, before I started attempting poetry.

So, today, everyone, read a poem by the birthday boy. Read it aloud. Savour it like a long life.

They Were Putting Up The Statue ...

They were putting up the statue