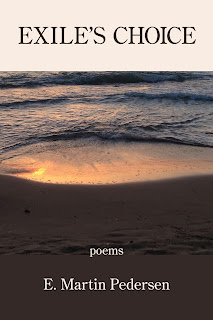 The Big One being my latest book of poetry: Exile's Choice. I published two small books of small poems recently, and I hope you liked them or will like them, but now here is my super-sized, loaded, extra-large book of recent published poetry. Actually, it's a chapbook, so it's not as big as the collection which should be coming out later this year, but I'm excited and thrilled to have this already available in a beautiful edition by Kelsay Books. The people I worked with there, Karen Kelsay and Delisa Hargrove, were very friendly and professional.

I got another big boost from some friends who were willing to write blurbs for the back cover or Exile's Choice. I'll print them for you in another post. Elli Sandis, Enrico De Lea and Mike Bausch are all great writers and did me a huge favor. I owe them tacos.

Exile's Choice is a group of poems obliquely centered around my experience as an ex-pat. I've lived in Sicily for over 40 years and have always planned to return to California. Now that plan is on hold, and since I moved to a small house near the beach with the birdsong, the rolling breakers, and a garden to tend, I might not return to the city, here or there. We'll see.

As I said in the introduction to Exile's Choice:

They say that the difference between exile and expatriation is the choice. When I came to Sicily in 1979 and stayed and stayed until today, that was my choice, right? Or did the island choose me? Between Scylla and Charybdis, the Sirens sing: run from/run to, familiar/strange, stay/leave, shoobie doobie. So, when living out of the red backpack lost its charm, I easily slid into a family-home-job so cozy that return became impractical, undesirable, near impossible. In a sense, I exiled myself. The choice I made made me.

"To go native" -- is that the passage from ex-pat to exile? Am I denying my daily decision, imagining myself a victim of fate, the starry-eyed wanderer who can't find his way home? I don't know. The expression I hear most often from the locals here in Messina is: 'why don't you go back?' Back? Back in time, you mean? The San Francisco of my youth no longer exists. Neither do I as I left it.

I hope you will buy this book. Not because I receive any monetary reward but because I want as many people as possible to read it. It's cheap. Buy some copies for your friends too. It's a young book by a young poet just learning to ride a bike. Push me along those first meters, and I'll wave and smile later when I come around the block smoothly cruising by. Thank you.
Martin
Go to the Amazon or Kelsay Books (.com) or write directly to me and I'll sign your copy (martinpedersen1255@gmail.com).
Posted by E. Martin Pedersen at 8:17 AM