Besides Dendera I spent several days at the Nyadire Hospital with its nursing school and teacher training college. I spoke to all the classes, had great political discussions with the young people my age (I was 20), and we enjoyed an afternoon of tennis (with very dead balls). The Finsters and I stayed with a Finnish nurse who helped out there (no doctors), and she taught me to play Mah Jong. One evening we were playing when Anika excused herself to go operate on the pregnant woman I had brought in. An hour later she rejoined the game. Mother and baby fine. In Nyadire health care is urgent but matter-of-fact. (This was before the AIDS epidemic.)

My grandmother’s cousin, named Alice Whitney, has always been a legendary figure in our family. She was a missionary for many years in Nyadire where she founded an orphanage. Many mothers died in childbirth so their children were cared for at the orphanage for a couple years and then returned to their families. Alice Whitney met with me in Berkeley before I went over to give me letters and photos, messages and instructions on who to greet. In Nyadire I met the head nurse who had been her assistant; I think her name was Joyce. She was happy to have news from Amai Whitney, now an elderly woman, but she explained to me that she wasn’t feeling very well that day: a malaria attack. I got the disease myself a few weeks later.

On our little tour of the two-room orphanage I noticed that the naked babies came and went from the dirty outdoors to the filthy tiled indoors. There was even some excrement and urine on the floor. I didn’t say a word, but Joyce explained that they had had a problem a few years prior when some Swiss nurses had taken over after Amai Whitney left. They had sterilized the surroundings and kept the entire environment sanitized. The babies were much healthier. As soon as they returned to their families in the villages, the children died from lack of antibodies. Now they kept the orphanage only semi-clean and encouraged the kids to play outside on the ground. 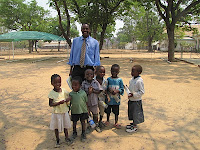 Another tragedy had happened before my arrival. The year before I went, another young American man had volunteered to work the summer in Dendera. At the airport he met with three European nurses he was to accompany into the tribal lands and drove them in a borrowed jeep. While barreling along the bumpy highway toward Mozambique he saw a rabbit in the road, swerved to miss it by instinct, flipped the jeep several times, then crawled out yelling, “Is everyone okay?” All three of the nurses were dead. Could have been me.

In Mtoko one day, where we stopped to get the mail, a little boy brought me an mbira, the wonderful thumb piano of the Shona. He had carved out the inside of a board and burned a pattern on top. The tines were bicycle spokes beaten flat. I gave him a little money and was initiated into the music of the mbira. First thing I did back in California was get the only record of mbira music available (The Soul of Mbira, recorded by Paul F. Berlinger). Music as beautiful as any I’d ever heard. Music as spiritual as the wind blowing, a creek flowing, or the tiny birds in the baobab trees. I didn’t see Victoria Falls, but I heard the sound through the mbira. I heard the now-vanished antelope herds. Suffering and resistance. Listen to this record and compare it to the singers at the Grammy Awards. They have no idea what singing really means deep down inside. All their narcissistic vocal gymnastics cannot compare to the simple voices of Africa. 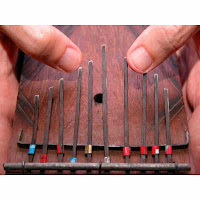 
Mutt: Remember Bertha? With her marriage she got a new name and a dress.
Jeff: When she saw her first strands of gray hair, she thought she’d dye.
Mutt: She fell onto an upholstery machine and was fully recovered.
Jeff: She was a geology professor, right?
Mutt: Yeah. Until she discovered that her theory of earthquakes was on shaky ground.
Jeff: No, I don’t remember Bertha.
Mutt: Me neither.
Jeff: Did you know that when fish are in schools they sometimes take debate?
Mutt: No. But I know that a bicycle can’t stand alone, it is two tired.
Jeff: Okay, I’ve got one to shut you up. Time flies like an arrow; fruit flies like a banana.
Mutt: Oowah!
Posted by E. Martin Pedersen at 7:54 PM