The official story:
"Mutt and Jeff were comic-strip characters from the early 20th century. A precursor to Laurel and Hardy, they were two working-class everymen -- drinking, gambling, and getting in hot water with their wives. In 1907, a San Francisco Chronicle cartoonist named Bud Fisher ...
By 1915 Mutt and Jeff were a national phenomenon. Many people consider "Mutt and Jeff" to be the first daily comic strip.
Mutt was a tall, lanky man with a penchant for the ponies, while Jeff looked like the Monopoly man after a rough weekend. Mutt and Jeff were affable losers -- the guys in the cheap seats at horse races on a Wednesday afternoon. Characteristic catch phrases used by Mutt and Jeff included "Nix, Mutt, nix!", "For the love of Mike!" and "Oowah!"" 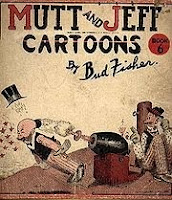 Officialer story:
Many years ago I lived alone in a shack by a canal. The plaster was rotting and the mould stinking so I usually left a door open when I was inside the one room kitchen-bedroom-study. There were two cats from the neighborhood who would walk into my house like bored housewives in a shopping mall, stroll around, sit a while, eventually traipse off till the next day. I called them Mutt and Jeff. I talked to them often. Maybe they understood English, or maybe they thought they could pick it up from listening to me.
Then one spring day a tragedy occurred. Mutt and Jeff, my only two buddies at the time, were in front of the shack where I could see them through the glass door, and what they were doing shook me and shocked me. Jeff was on top of Mutt (or vice versa) from the rear biting his neck and they were both screeching in intense pain, wiggling to get free, and ecstatic. I finally realized that one of them was a female and felt so strongly “in the mood” that I could smell it through the closed door. I’m not sure which, since I could never tell them apart. I bet they knew which was which.

The real true authentic story:
I hate Mutt and Jeff. They always criticize me and make fun of me. I wish they’d leave me alone. I’m very sensitive and can’t take it anymore. At least they don’t listen to my songs on the other blog (Martin’s Moan and Drone), or there’d really be some hooting.
And what are those jokes? I don’t get them. It seems they mean to be funny, but come on! Humor, to be humorous, must be much more intelligent than their weak one-liners. Example:
A punster entered a local paper's pun contest. He sent in ten different puns with the hope that at least one of the puns would win. Unfortunately, NO PUN IN TEN DID.