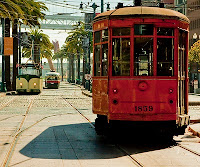 Or San Fran, SF, The City, The Sco, Bagdad by the Bay, The City that Knows How, Fogtown or anything else but its name: Yerba Buena (good grass?) or the newer name: San Francisco.
Actually, Herb Caen, local gossip and hero, started the anti-Frisco movement in the early 50’s, I believe, so for over 100 years nobody had a problem with the nickname. Here’s an alternate explanation I like:

“Frisco” is, of course, a contraction of San Francisco, but there are other theories about its origin. Some have suggested it is an Americanization of el fresco, a term apparently used by Mexican immigrants coming to Fog City to escape the heat of the Sierra Nevada.
The late etymologist Peter Tamony traced the word all the way back to the Middle English frithsoken, meaning refuge or sanctuary. Shortened to "frisco," the term was apparently used by sailors to refer to any port where ships could be repaired.

So what is a San Franciscan? Immigrants and refugees, of course, like everywhere. But do those of us squeezed in a few blocks between the Pacific and the Bay really have a collective personality? Are the fruits and nuts native? Do those chilly summers cause frostbite patterns in the gray matter? I’m sure the fog, creeping in the ears, scrambles the synapses. Maybe a list would help answer all these questions (probably not but I’m, as you know, a compulsive list-maker).

Terrific work! This is the type of information that should be shared around the web. Shame on the search engines for not positioning this post higher!

It’s really a nice and helpful piece of information. I’m glad that you shared this helpful info with us. Please keep us informed like this. Thanks for sharing.

found your site on del.icio.us today and really liked it.. i bookmarked it and will be back to check it out some more later

Thank you, I have recently been searching for information about this topic for ages and yours is the best I have discovered so far.

Valuable info. Lucky me I found your site by accident, I bookmarked it.