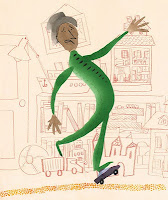 “Break a leg,” in English, means ‘Good Luck.’ Not where Neal is concerned.

There are lots of man-holes in Messina (winkwink-nudgenudge-saynomore), and many of the ones on the sidewalks are uncovered. Something happens and the cover disappears so you have a hole about two feet square open to the sky and a thousand miles deep. They are rarely repaired. They can be dangerous and must be avoided.

Neal was walking down the street one bright morning several years ago. Guess what happened. Was he watching carefully where he was going? Did he look down to see the open manhole in his path? You know the answer.

He stepped right in it and broke his right leg. It hurt like hell. Some passersby called an ambulance and helped him lie on the filthy sidewalk until it came. They put a newspaper under Neal’s head so as not to dirty a jacket or something soft. Neal’s head bounced on the cement a time or two as he writhed in pain. They yanked off his cowboy boots, causing a long scream. They brought Neal a glass of water. He wasn’t thirsty.

The ambulance eventually came and picked the heavy Neal up off the sidewalk, picked up his cowboy boots, and carried the crying Neal to the hospital. Not the nearest hospital, which didn’t have the resources to deal with such a rare and complicated accident, but to another hospital much further away. The ride was painful with every bump in the road. In Messina there are many.

In the Emergency Room, Neal waited for several hours. Several hours is a long time to wait with a broken leg. He asked the people dressed like medical personnel (you can never tell who’s a doctor, a nurse or an orderly) if they could help him. Even though he spoke in Italian they acted like they didn’t understand. Finally, they gave him a pain-killer (aspirin) and explained that they had some life-or-death cases to take care of first. Well, nothing to say about that. You wouldn’t want someone to die because the doctors were busy putting your leg in a cast. Would you?

He saw some of them smoking outside, chatting or chewing on candy bars and flirting. Must have been their break; everyone’s entitled to a break. Then, right before Neal passed out, a doctor, Dr. Lempo, finally arrived to take a look. “How are you, American Boy?” Neal is British.

“Okay, here is a bit gonfia. What is gonfia in the English?”

“Swollen,” Neal answered, wondering why the great Doctor was examining the left leg. Probably he wanted to see the contusion and scrape that the sound leg had suffered in the fall. Dr. Lempo was feeling the bone with his thumbs on the ridge of Neal’s left leg—maybe he would then compare the swelling to the broken right leg—but gradually Neal became suspicious that Dr. Lempo had not understood which leg was really broken. As Neal started to say something, the doctor banged the broken right leg with his elbow.

Neal yelped in pain and tears ran down his cheeks. “Oh, don’t being the baby. This leg, this leg … I no think.” Wincing Neal was pointing to his right leg because he could not speak. The doctor said, “No, no, I no think …” and whacked his elbow into Neal’s broken right leg again. Neal screamed again; his right leg was twice its normal size.

“Ma insomma, I can no do examination if you cry like baby.”

A nurse whispered something in the doctor’s ear. “Okay, American cry baby, we take the x-ray now.” And he shipped Neal off to radiology to get rid of him. Two more hours waiting during which the nurses had to cut his jeans off. Neal’s leg was purple, and it was dark outside when Neal’s x-rays were finally ready.

Dr. Lempo was still on duty. He made incomprehensible jokes while he applied the plaster cast to Neal’s right leg (directed by the nurse) and complained that those people in radiology always get things wrong.

Neal had to call his friend Gianantonio to bring him some jeans and crutches, and take him away from his 12-hour ordeal in the E.R. The jeans were too small (very few Italians wear Neal’s size), and they couldn’t find crutches until the sanitari opened Monday morning. Neal had to leave the hospital leaning on his friend in a backwards dressing gown, holding his cowboy boots and dimission papers. The staff cracked up watching.

Neal never got the hang of walking on crutches, of course. As he tried to use them the first time, one got caught behind the heel of the cast and he went tumbling to the ground again. None of us were surprised by that, in fact it was pretty hilarious. Neal was hurt, but nothing new was broken.


Mutt: A man—maybe Neal—woke up in a hospital after a serious accident. He shouted, "Doctor, doctor, I can't feel my legs!" The doctor replied, "I know you can't - I've cut off your arms!"
Jeff: Finally a funny one.
Mutt: You know how stress causes falling hair?
Jeff: Yep.
Mutt: When the going gets tough, the tufts get going.
Jeff: Okay, two fish swim into a concrete wall. One turns to the other and says "dam!"
Mutt: Well, I went to the butchers the other day, and I bet him $50 that he couldn't reach the meat off the top shelf. He said, “no, the steaks are too high.”
Jeff: A three-legged dog walks into a saloon in the Old West, he sidles up to the bar and announces: "I'm looking for the man who shot my paw."
Mutt: Two vultures get ready to board an airplane, each carrying two dead raccoons. The stewardess looks at them and says, "I'm sorry, gentlemen, only one carrion allowed per passenger."
Jeff: Why did the golfer bring two pair of pants to the game?
Mutt: I’m afraid to ask.
Jeff: In case he got a hole in one.
Mutt: And last but not least, here’s one about you.
Jeff: Really?
Mutt: Yeah, because outside the bathroom you’re American.
Jeff: Uh huh.
Mutt: But inside European.
Posted by E. Martin Pedersen at 11:12 AM

I call BS. Anyone who can speak Italian but is unable to communicate with a doctor about which leg is broken (regardless of the pain) deserves every bit of pain he gets. Your little fable falls apart for me right there.

Pure gospel. I can show you the scars.