Neal Under the Tree 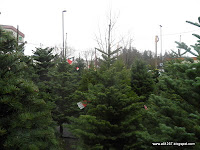 This year Neal waited until December 24th to buy his Christmas tree. That way he would save a lot of money and still have a nice evergreen for the living room. Of course, when he got to the cut tree sale in the shopping center parking lot, most of the ones left were crooked, needle-less and sickly. The heavy snows had made many trees grow into question marks. Yet the fat man and his sons still had plenty of Christmas trees for sale; maybe they’d overstocked.
One flashing thirty-footer was on display at the back end of the lot. The clever idea was that the shoppers would enter from the front and on their way to see the huge decorated tree at the rear would find a darling to set their hearts on. Plus, you could see the tree sales area from miles away.
Many people did buy trees, the cute ones, but by the 24th there was still half a lot full, half off, 70% off, and make us an offer. Tomorrow they’d all go into the shredder, except the Paul Bunyan model that would go chopped into the fireplace.
When they saw Neal coming, they got ready to make one final deal. One of the kids asked him as he ambled in, “You need a piece of rope to tie up your tree?” And Neal thought that a bit odd but took the offered rope end just in case. He pulled it behind him like a dog leash. What he didn’t realize, because he was distracted looking so hardly at the crumpled trees, was that the boy hadn’t cut the other end of the rope and Neal was trailing the whole spool behind.
In the spirit of the jolly season, in the spirit of eggnog and peppermint schnapps, the fat man and his boys watched as Neal walked around amongst the trees holding the end of a rope that wasn’t cut and kept rolling off the spool by the entrance. They laughed till they held their sides; they cried and made each other laugh even more. The younger boys were bent over double, and the father had a coughing-spitting attack, then continued laughing. Nothing was ever as joyous and merry as this doofus dragging a rope all around their trees.
Neal, on the other hand, was using his keen eye and fine sense of judgment to get the very best of the rejects that remained in the lot. He wouldn’t be cheated, and he planned to get his tree for 80% off, if not more. He arrived at the telephone pole-height lighted tree at the end of the tree lot (out in mid-parking lot). Plus, he had reached the end of his rope.
Neal, who thought he maybe had a six or eight-foot piece of rope, the length used to tie a tree to his car roof, who thought it may have gotten caught under a tree’s tiny x-stand, who stood hidden in a forest of dry aromatic firs, pulled on the rope end to no effect. He was peeved at this stuck rope deal because he had seen several contenders and was trying to remember which tree would look best in his apartment. So he pulled harder. To unstick his rope, Neal leaned back and yanked with all his might.
The hundred foot rope pulled the trees at the entrance; it pulled them over in fact. Those first dominos toppled over the one next to them and the whole forest started to shift. Timber! Neal couldn’t see over the tops near him, but he could hear some shouting and some rumbling. He pulled again, dammit, that rope was really wedged in tight under something! Row after row of trees fell towards our hero. When he finally saw the avalanche he turned to run in panic.
The Christmas trees seemed to be chasing him. Neal cried out like a girl. He turned right around to run as fast as he could away from the tree monsters coming to get him. Blindly he ran smack into the big tall pine trunk with the blue, red, yellow, green lights flashing on it. Neal smacked his hard forehead on the tree so hard that it tottered. People pushing their shopping carts to their cars couldn’t figure out what was happening in the tree lot area, but the trees were all tipped on their sides and the big one was starting to lean. Neal had fallen back onto the ground, knocked out cold, possibly dead. The big tree couldn’t recover its balance and fell out into the parking lot. A white SUV was coming around that lane. People shouted at the mother in the van to stop, but she couldn’t see what was about to crash onto her head.
The tree fell with a thud and a swoosh of dust right in front of the SUV; the woman swerved, avoiding disaster, but then skidded and bashed into a couple parked cars. No one was hurt, except Neal who woke up in an ambulance. There were cops at the E.R. and the fat man who said he’d lost his whole business to the Ropeman and the SUV woman and the parked car owners who had called their lawyers and insurance agents. Neal had a concussion and could not understand much, but none of it was good.
Even though a thunderstorm of trouble would arrive in the coming weeks--four lawsuits against Neal for an accident not his fault--Neal celebrated Christmas at home with a bandaged head and a puny three-foot fake tree the nurses at the hospital had given him. It most likely had belonged to a patient who’d died before he could use it. Merry Christmas, Charlie Brown!
Happy trials, Martin

Mutt: Good day, partner.
Jeff: And a jolly good day to you old pal.
Mutt: I’ve got a question.
Jeff: Do you now?
Mutt: Is there another word for synonym?
Jeff: Is it possible to be totally partial?
Mutt: Should vegetarians eat animal crackers?
Jeff: Instead of talking to your plants, if you yelled at them would they still grow (only to be troubled and insecure)?
Mutt: I don’t know, but the question bothers me.
Jeff: I’ve got another. Isn't it a bit unnerving that doctors call what they do ..."practice"?
Mutt: Let’s go to the races.
Jeff: I hear the ponies calling.
Mutt: What do they say?
Jeff: Trifecta, brother, trifecta.
Posted by E. Martin Pedersen at 8:36 AM